During 2003, hip-hop, R&B, and deft combinations of both ruled the charts for months, so it's no surprise that this is reflected in 2004's GRAMMY NOMINEES album. The collection kicks off with Beyonce's horn-laden "Crazy in Love" (featuring her beau Jay-Z), followed by the socially conscious Black Eyed Peas/Justin Timberlake track "Where Is the Love?" (Timberlake turns up again later, crooning on his own synth-heavy hit "Cry Me a River.") Eminem and 50 Cent represent straight-up hip-hop, while Missy "Misdemeanor" Elliott and Outkast offer their quirkier, more expansive takes on the genre.

Despite the commanding presence of rap and R&B, there's still plenty of room for pop and rock. Coldplay's majestic "Clocks" stands with songs by two late, great rock luminaries--George Harrison and Warren Zevon. Elsewhere, Sting presents his electronica-tinged "Send Your Love," Evanescence blasts through "Going Under," Fountains of Wayne contemplates "Stacy's Mom," and Rob Thomas of Matchbox Twenty reminds listeners that he's not crazy; he's just a little "Unwell." As in past years, this edition of GRAMMY NOMINEES tidily wraps up many of the previous year's finest hits into one concise package, making it an indispensable musical time capsule. 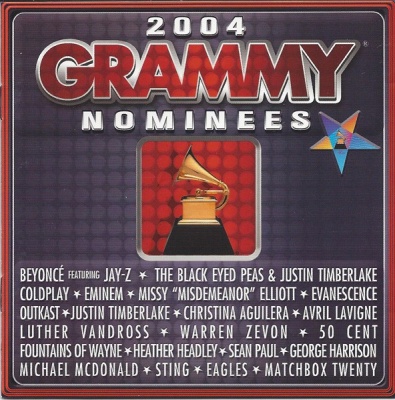