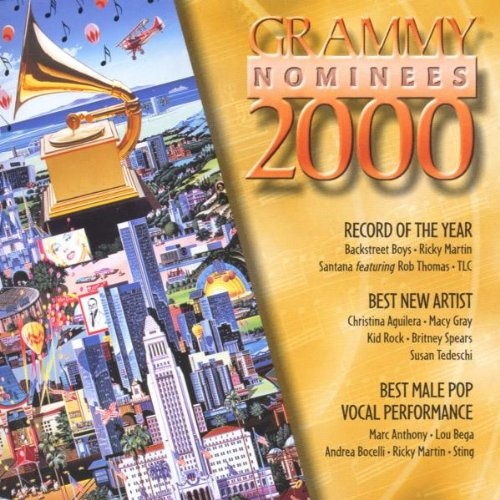 The purpose of Grammy Nominees 2000: Pop is pretty self-explanatory: It contains 13 highlights from the Grammy's 2000 nominees, which really are hits from 1999. Since space is limited to 13 songs, and a compilation of current hits, by its very nature, needs to be crosslicensed, it should come as no surprise that there are several noteworthy nominated songs absent, such as Cher's "Believe." That may be a disappointment for some listeners, but it's hard to argue with the fact that this offers a snapshot of mainstream America's music tastes in 1999. Sure, listeners may quibble over some of the inclusions here just as a matter of taste -- fans of Andrea Bocelli may like Sting, but chances are, they're not going to get in the pit and try to love someone, no matter Kid Rock's demands -- but that's OK, since many of the year's biggest pop, urban, rock, and dance hits are here: the Backstreet Boys' "I Want It That Way," Santana and Rob Thomas' ubiquitous "Smooth," Chritina Aguilera's "Genie in a Bottle," Marc Anthony's "I Need to Know," Ricky Martin's "Livin' la Vida Loca," Lou Bega's "Mambo No. 5," Macy Gray's "Do Something," TLC's "No Scrubs," Britney Spears' "Baby One More Time...," and, of course, Kid Rock's peerless "Bawitdaba." That alone makes it worth the price of admission for any fan of Top 40 pop radio of 1999. It may be possible to hear these songs anytime you switch on the radio -- at least throughout 1999 and early 2000 -- but it's nice to have them all on one disc. After all, there will be a point in the future when they won't be endlessly spun on the airwaves. This release captures the moment in time when they were always played and always heard.