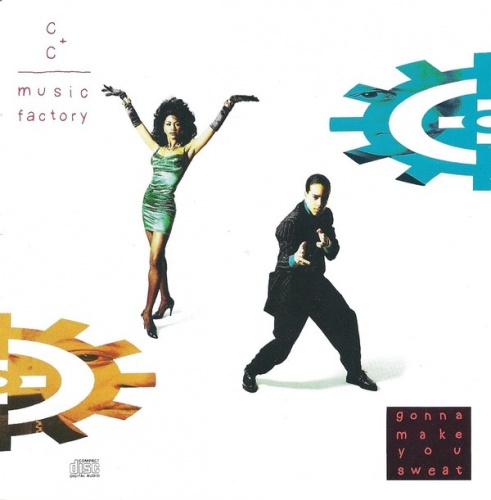 In the mid- to late '80s, house music took over dance floors across Europe and in larger American cities, namely Chicago. By 1990, several house music hits climbed the upper reaches of the U.S. pop charts, among those being Snap!'s "The Power," Technotronic's "Pump Up the Jam," Deee-Lite's "Groove Is in the Heart," and Black Box's "Everybody Everybody," but C+C Music Factory took it all the way to number one in early 1991 (the very same week of the Gulf War) with their unstoppable "Gonna Make You Sweat (Everybody Dance Now)." The song incorporated dance, house, and hip-hop beats, wailing diva vocals (courtesy of Martha Wash), and rap (courtesy of Freedom Williams) to come up with one of the year's most exciting hits. Controversy ensued around that song's video when it was revealed that former Weather Girl Martha Wash sang the lead (as she did with Black Box's recordings), but it was Zelma Davis who lip-synced on video. Nonetheless, this controversy didn't hurt C+C Music Factory (or Black Box) because Zelma Davis proved herself a singer in her own right (although nowhere near Martha Wash), and sang on the rest of the album's tracks. "Gonna Make You Sweat"'s follow-up, the anthemic "Here We Go, Let's Rock & Roll," became a Top Five smash, and melded house, hip-hop, and rock. Gonna Make You Sweat's third single, "Things That Make You Go Hmmm...," took a phrase popularized by Arsenio Hall and made it into another cleverly infectious Top Ten smash. The album's final single, "Just a Touch of Love," was a sleek, elegant, straight-up house jam sans rap, featuring Zelma Davis on vocals, but didn't become as big a hit as the others. Zelma offers up another anthemic house tune on "Live Happy." Other highlights include the ten-minute funky rap jam (à la DNA's remix of Suzanne Vega's "Tom's Diner") "A Groove of Love" and the slinky "Ooh Baby," which features rare vocals courtesy of frontman David Cole. The act took several years (and a lineup change) before their follow-up, Anything Goes!, hit the shelves, but by then the magic had faded and American popular music had turned into grunge and gangsta rap. Tragically, David Cole died shortly thereafter. But when C+C Music Factory were hot, they were unstoppable, and this album captures them at their best, and, despite a couple of dull spots, stands as one of the definitive dance/pop albums of the 1990s. As an additional note, the album includes an eight-minute bonus house track.