Despite the title, with 2005's God's Project, Aventura continues to define their own destiny. In fact, with their widespread popularity and the outpouring of groups who mimic their distinctly New York-influenced bachata, they may be helping to define the genre, as well. Under the clever guise of a boy band lurks some genuine musicianship, particularly evident in Lenny and Mikey Santos. The musician's ear will delight in Lenny's skillful guitar playing and tasteful, hip production, which foreshadow a long, fruitful career in the industry. Though lacking depth at times, the vocal style of Anthony "Romeo" Santos has become a hallmark of the group and has won the affection of fans far and wide. The reggaeton-influenced "Ella y Yo" and the spirited merengue "Por Tu Orgullo" are welcome variations on an otherwise stylistically homogeneous disc. The lack of variation in instrumentation, key, and tempo can become tiring. But it is exactly their dedication to their Dominican heritage and an original sound that has saved them from pop mediocrity. An absolute favorite with young urban Latino audiences, Aventura is already a staple in a rapidly developing market. God's Project, certainly the most consistent in quality so far and perhaps their strongest release period, establishes them as more than a pop phenomenon. 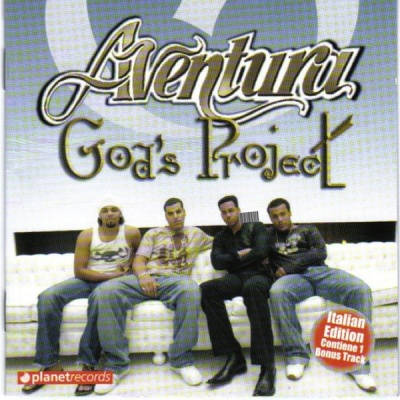