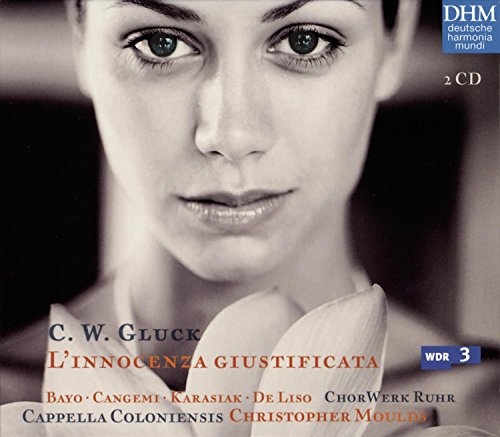 Most opera fans are familiar with Gluck the reformist -- the composer of Orphée et Eurydice who sought to balance drama and music in his works. But few know his early works which show him to be a master of the Baroque opera seria tradition he later rejected. L'innocenza giustificata, a festa teatrale written in 1755, is one of these works. Its structure -- cobbled together from aria texts by Pietro Metastasio, but with new recitatives by Giacomo Durazzo -- already shows a desire to create more dramatic continuity and interest than was commonly found in the Baroque period. The music is a jumble of Baroque and Classical elements: florid da capo arias, almost Mozartian recitative, and ensembles that show the emerging influence of comic opera. But the opera seria influence is unmistakable. The resulting stylistic hodgepodge can't be considered entirely successful. But it is interesting, and Christopher Moulds and the Capella Coloniensis make about as compelling a case as possible for it. Leading the cast, María Bayo struggles somewhat with the more ornate passages and has some intonation problems, but she also clearly understands this music, and in the end she makes for a satisfying heroine. Andreas Karasiak's short top range is a liablility in his role as the Roman Consul Valerio. Marina de Liso is excellent as Flaminia. But the show belongs to Verònica Cangemi in the role of Flavio, the hero. She tears into florid runs and rangy phrases as if she could sing them all day, and turns in a thoroughly exciting performance. Her tracks are the ones you're most likely to play over again when you listen. If you're curious about Gluck's work from the 1750s, you won't have many better opportunities than this.