Give or Take Review

Giveon made such a strong early impression as a rising star in 2019 and 2020 that Justin Bieber, irked that none of his Grammy nominations had been in an R&B category, sought the unequivocally R&B baritone and Daniel Caesar to make "Peaches." It was as if Bieber said, "What about this? It's like literally at least two-thirds R&B." The move worked, earning Bieber and his well-chosen partners a Grammy nomination for Best R&B Performance. Giveon himself had already picked up a Best R&B Album nomination for Take Time, but that eight-song offering was really an EP, making Give or Take the singer's first true album. (2021's When It's All Said and Done...Take Time, a compilation, wasn't given the debut LP designation either.) Give or Take had a couple significant singles precede its June 2022 arrival: "For Tonight," a yearning adult contemporary ballad in Sam Smith's wheelhouse, and the doubly vulnerable "Lie Again," an "I Don't Wanna Know" for the 2020s. The two songs weren't fake-outs, as the bulk of the LP sees Giveon working through assorted heavy-hearted matters in a fashion that shows growth and openness as a songwriter. Whether the subject is repentance, insecurity, lonesomeness, or frankness about wanting a one-dimensional relationship, Giveon pours his heart into it. He manages to remain a sympathetic forlorn character even when he's meeting a fan after a concert, singing "Get a kiss or two 'cause you listen to me/This ain't real, but this'll do." He's best and most affecting when in a state of conflicted apprehension, conveying a song's worth of feeling in the first two lines of "Another Heartbreak": "Tears don't fall when you're right here/Perfect for me, that's my fear." Giveon's rich and graceful voice remains so distinct that he could get away with singing nonsense. Despite the involvement of roughly two dozen production partners, the set is cohesive, almost to a fault, and most stimulating when it's slightly vaporous yet bristly, with a foundation in low-end thrum. 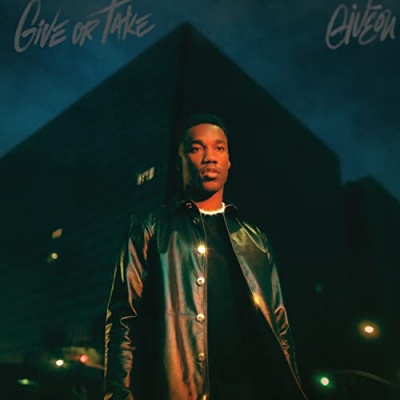 Give or Take Album Information