Freedom: Songs from the Hearts of America Review

National pride, patriotism, and ruminations on the spirit of freedom were in vogue in America in the early '00s in the wake of the attacks on the World Trade Center. This three-CD, 67-song set is the companion musical release to the eight-hour PBS television series Freedom: A History of US. American freedom is a big concept to cover even given eight hours, and the same challenge, with its rewards and problems, applies to a box set based around the theme, even given three discs and 67 songs. To be sure, there is an enormous amount of variety within this package, spanning World War I to 2001 and stylistically covering most forms of American music from folk, country, blues, pop, jazz, and classical to rock, gospel, soul, Broadway, and cowboy music. There's a lot of good stuff here, from recognized classics (and even some chart hits) to some imaginatively off the beaten track selections. The set's chief drawback is inextricably linked to its chief asset, though. With so much variety, it's not too certain that a whole lot of listeners will be in the mood to hear so many styles and sentiments side by side, particularly once the memory of the TV series has faded, if only for those inspired to purchase the music by the program. There does seem to be some rough categorization to the sequencing, though, with much of the more traditional material on disc one, recordings and popular styles from the early and mid-20th century on disc two, and disc three devoted largely to more popular rock, soul, and folk songs from the rock era.

There is, as expected, a surfeit of flag-waving tunes: "Yankee Doodle" (a 1917 recording by the Broadway Quartet featuring Charles Harrison that's the oldest track on the set), "The Star Spangled Banner" (Duke Ellington), "Dixie" (Gid Tanner & His Skillet Lickers), "The Battle Hymn of the Republic," "America the Beautiful" (by Keb' Mo', and with a 2001 recording date, one of the most recent offerings), "Stars and Stripes Forever!" (by the New York Philharmonic with Leonard Bernstein conducting), and "God Bless America" (Kate Smith). Others focus on the beauty of the land itself, like "This Land Is Your Land" (a "duet" between Woody Guthrie and son Arlo Guthrie) and Gene Autry's "Home on the Range." To its credit, though, this isn't just jingoism, also giving time to songs that strive for freedom against oppression and express dissent, or at least ambivalence. Foremost among those are Nina Simone's "I Wish I Knew How It Feels to Be Free" (not exactly a well-known standard and a particularly imaginative selection), Louis Armstrong's "(What Did I Do to Be So) Black and Blue?," Bing Crosby's "Brother, Can You Spare a Dime?," Billie Holiday's "Strange Fruit," Paul Robeson's "Joe Hill," Mahalia Jackson's "We Shall Overcome," Bob Dylan's "The Times They Are A-Changin'," Pete Seeger doing "If I Had a Hammer," Curtis Mayfield & the Impressions' "People Get Ready," Simon & Garfunkel's "America," the famous "America" song from the Broadway show West Side Story, Richie Havens' Woodstock performance of "Freedom," and the Isley Brothers' "Fight the Power."

There are also songs that don't particularly take a stand on freedom, but are more reflections of the American spirit, or of Americana. There are also songs that are more spiritual in general than specifically oriented toward American liberty, like "Amazing Grace" (Willie Nelson's version) and the Carter Family's "Can the Circle Be Unbroken." And there are songs that are more a celebration of freedom than anything else, like Sly & the Family Stone's "Stand!," Martha & the Vandellas' "Dancing in the Street," and Bruce Springsteen's live cover of "Chimes of Freedom." Some of the more interesting cuts are ones in which the compilers obviously used their noggins and dug up cool items that weren't expected clichéd classics, like Count Basie's "Did You See Jackie Robinson Hit That Ball?," the Golden Gate Quartet's goofy post-nuclear ode "Atom and Evil," the Almanac Singers' version of Woody Guthrie's "Union Maid" (with both Seeger and Guthrie), Kay Kyser's "Praise the Lord and Pass the Ammunition," and Gene Autry's "The Death of Mother Jones" (yes, he really did sing a song with that title). There's still, in the end, too high a quotient of the earnest feel-good breast beating imbued in much American patriotic music. There's nonetheless, to be sure, also much classic and seminal American popular music, though it might be better heard by sampling individual favorites than getting through the whole melting pot at once. 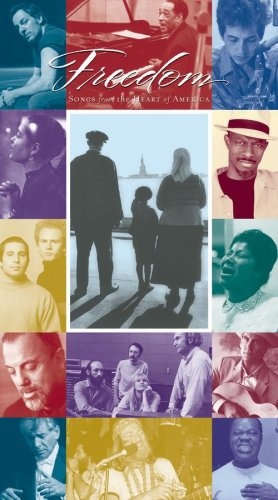 Freedom: Songs from the Hearts of America Album Information