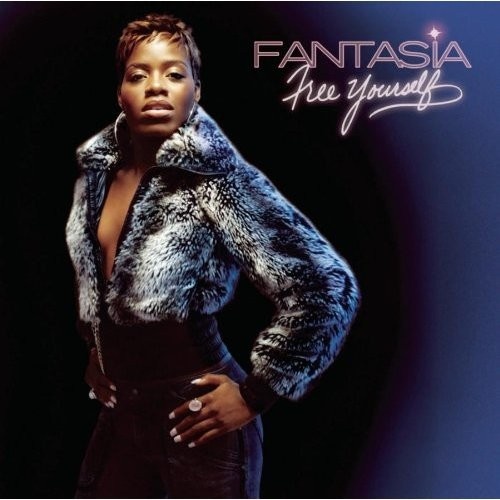 "Love you Clive Davis, thanks for being so gangsta!" So says Fantasia Barrino -- now simply billed as "Fantasia" since divas are, by law, not allowed to have more than one name -- in the liner notes for her 2004 debut album, Free Yourself. This indicates both Barrino's relative naïveté and the nature of Free Yourself itself. Fantasia was the winner of the third American Idol competition in 2004, and while Clive Davis has shepherded all of the previous AmIdol winners and runner-ups, it's possible that Barrino had spent so little time in the music biz that she didn't grasp the depths of either Davis' legacy or his savvy, the latter of which was clearly on display on each AmIdol record. Under Davis' direction, Kelly Clarkson, Justin Guarini, Ruben Studdard, and Clay Aiken all made records tailored for a specific audience, which is the reason they all had great success (well, with one notable exception), so it should come as no surprise that Davis has steered Barrino straight to the streets to make an album that thrives on urban R&B inflections and style. Free Yourself is looser and hipper than any previous AmIdol album. Gone is Matthew Wilder, who contributed to Kelly's debut; gone are Neil Sedaka and Aldo Nova, who featured heavily on Clay's album. In their place are Missy Elliott, Jermaine Dupri, and Rodney Jerkins, hip-hop hitmakers who give a good indication that this album is striving to seem fresh and hip, something that no other American Idol album has even attempted. Of course, the show-biz trappings haven't been completely abandoned -- Fantasia's showstopping rendition of Gershwin's "Summertime" has been revived, and it's been given an overwrought treatment that's slicker and more mannered than either of her performances of it on the show. And that reveals Fantasia's biggest weakness, which is part of the inherent flaw of American Idol: it rewards contestants who put on a show of being a great singer instead of actually being a great singer. Of all the third-season contestants, Barrino trumped all her competitors in terms of sheer dramatics and histrionics, and that made her more memorable than equally talented singers such as Latoya London. While Fantasia's Macy Gray-meets-Mary J. Blige-and-goes-Broadway voice may have made for great television, where it sounded unique when delivered in two-to-three-minute bursts, it grates over the course of a 13-track record. There's no doubt that she has chops, but the problem is her thin timbre, which is an acquired taste. To doubters, she seems to squawk her songs as much as sing them, but to her fans, it's all part of her idiosyncratic style. That argument was easier to accept when she was only on TV, but like all AmIdol winners, she is less impressive on record than she is on the show. Fantasia is a compelling presence on television, and she has more charisma on record than any of her peers, but without the visuals, her vocals seem mannered and overly histrionic, which may suit her diva-in-waiting persona but doesn't necessarily make her a diva. Unfortunately, Free Yourself decides to play up that diva fantasy, mythologizing her downtrodden beginnings and status as a "Baby Mama" and throwing in several tracks that swagger as if she were already a rival to Mariah. This gives the enterprise a slightly distasteful undercurrent, but the album is well crafted, rarely sounding like a rush job -- only the covers of "Summertime" and "You Were Always on My Mind" sound chintzy, and Fantasia never sounds winded the way Ruben did on his record (however, it is inexcusable that the songs don't match the printed track listing on the initial pressings) -- and it gets by on its sound and style, both from the producers and Fantasia herself. If it delivers no knockout punches, at least it maintains the mood and groove from beginning to end and is considerably more fashionable than anything American Idol has yet produced.