In an era when box sets are so plentiful and are basically de rigueur for any major, and some not so major labels, it's virtually a wonder that a Weather Report box set didn't appear until the 21st century. Things take as long as they must, evidently, and Legacy has done an outstanding job with this set. Consisting of three CDs and a DVD of a phenomenal live concert from 1978 (with Jaco Pastorius and Peter Erskine on the Heavy Weather tour), this document considers every aspect of the band's career carefully and thoughtfully. It actually commences on disc one with some of Wayne Shorter's and Joe Zawinul's pre-Weather Report ensembles, beginning with their joint membership in Miles Davis' band during the Bitches Brew era with "In a Silent Way." Zawinul composed it; he and Shorter both played on it. This short version of the tune was recorded by Davis, but according to Hal Miller's fantastic liner notes (there should be a Grammy nomination for these), Zawinul never gave Miles the intro for the tune, just the one-chord vamp; his own version is very different. Also here is Shorter's "Super Nova," from his Blue Note record of the same name, along with an excerpt of Zawinul's "Experience in E" with the Cannonball Adderley band (from Adderley's Domination). The reason? Both men embraced concepts and tropes that became part of the Weather Report's method of working.

The actual Weather Report tunes begin with "Milky Way," from their debut album, and continue with four more from that album, including the full version of "Eurydice." Weather Report was a free and progressive band which took its composer's frameworks and built floating, drifting, melding, sparkings of ideas into them; members at this point also included bassist Miroslav Vitous, percussionist Airto Moreira, and drummer Alphonse Mouzon. The band's sound got bigger and stranger on the classic I Sing the Body Electric disc from 1971. Moreira was in transition and Eric Gravatt entered the drum chair as Dom Um Romão became the band's percussionist. There is one of two unreleased cuts from these years: a different version of Zawinul's "Directions" with sparks aplenty. The real emergence of a new Weather Report sound began in 1973 with the underrated and classic Sweetnighter. While only "125th Street Congress" is included to round out the first disc, it is a mighty one, clocking in at over 12 minutes and showcasing for the first time the kind of deep funky groove the band was capable of; the song included not only Vitous, but also electric bassist Andrew White, who played English horn on "Unknown Soldier" on their previous album. This is the point where the bass-heavy groove began to dominate the band's sound, and rhythmic groove became the centerpiece not only for improvisation, but composition as well.

Disc two kicks off with an unreleased live version of "Nubian Sundance" from 1974, with electric bassist (Vitous had left by this point in time for a solo career) Alphonso Johnson who'd also played on Tale Spinnin'. Pastorius made his first appearance with the band on "Black Market" and thereafter Weather Report became a different unit. The music became more progressive, funky, and complex, where the groove was decorated with all kinds of syncopated keyboard and saxophone charts, and Pastorius became the centerpiece of the band's sound, and its third composer. (His loss is clearly felt on Procession and Domino Theory, with Victor Bailey replacing him.) This sound becomes paradoxically more and more idiosyncratic and complicated. All the predictable selections are here, from "Birdland," "Three Views of a Secret," "Palladium," "Pursuit of the Woman in the Feathered Red Hat," "Dream Clock," and "Dara Factor Two" from the subsequent studio albums, by which time the trio of Zawinul, Pastorius, and Shorter was aided and abetted alternately by drummers Peter Erskine and Omar Hakim, and percussionists Bobby Thomas, Jr., Mino Cinelu, and Jose Rossy, among others, and there are some live cuts from the 8:30 album, including the stunning "The Orphan," where Shorter and Zawinul played with the West Los Angeles Christian Academy Children's Choir. There is also a DJ Logic remix of "125th Street Congress," perhaps to illustrate how the band's sound has remained current after all this time. The DVD from the Heavy Weather tour with Pastorius and Erskine is simply outstanding, whether watched or listened to, it is a document that fans and collectors live for; there have been some dodgy boots of the music out there, but nothing matches this sound quality. All assembled, this is a fitting box set that represents a seminal part of jazz and pop/rock history. The only gripes are that some more of the unedited material from Live in Tokyo (the stuff that didn't make it to the flip of I Sing the Body Electric) isn't here, since the album was never issued in the United States, and there isn't more unreleased material. But in sum, this is perhaps really a teaser to induce listeners to dig into the band's catalog. It serves not only as a fitting introduction to Weather Report, but also as a definitive will and testament to a band that was both a critical and popular success for over a decade. 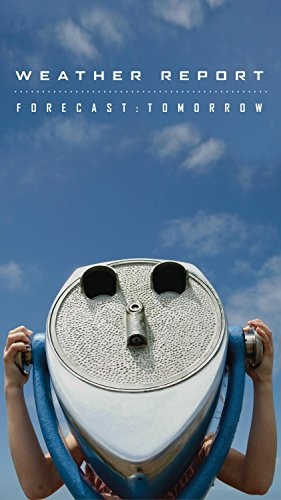