For All Time Review

This five-CD box set collects all five of the Dave Brubeck Quartet's Time series recordings: Time Out, Time Further Out, Countdown: Time in Outer Space, Time Changes, and Time In, with bonus material attached to three of the discs. Of this quintet of recordings, the latter three have never been available on CD in the United States. Recorded between 1959 and 1965, each of these titles has a distinct relationship to "time travel" in the context of jazz. Brubeck, Paul Desmond, and company were consciously trying to extend the time-space continuum in jazz, and erase the boundaries of imposed four/four signatures in the idiom. Time Out was the first jazz album on which every tune was in a different tempo, and it charted all over the world. Time Further Out netted another hit single with "Unsquare Dance" and its B-side, "It's A Raggy Waltz," a live version of which has been added to the original edition of the album. But these sides have been continually available in one form or another since the dawn of LPs, and were among the first to get the grand remastering treatment in Legacy's ambitious program. From the appearance of Countdown: Time in Outer Space, from 1962 (paying tribute to the new exploration of the last frontier by trying to open up jazz from the inside rather than out); it features the amazing "Eleven Four," by Desmond, in which he creates a rhythmic series of groupings around five/three/three and of course, the widely recognized "Why Phyllis," by Rayburn Wright, which is a blues waltz in three-quarter time. Perhaps the most provocative piece on the disc is the reworking of "Someday My Prince Will Come," which could not have been further from Miles Davis' read of it (and predates it). On "Castillean Blues," a standard blues is shaped into five/four and given the Latin percussion treatment. The album also features a bonus cut and new liner notes by Teo Macero. Time Changes, from 1964, features the beautifully wrought 17-minute epic "Elementals," on which the Brubeck Quartet was accompanied by a full-on symphony orchestra. Macero also recorded a single version of the cut, which was never released until now as the bonus cut. Finally, Time In from 1965, the Brubeck Quartet's 15th anniversary album, is also included. Here, in addition to all of the platitudes from jazz writers and musicians -- as well as a breathy essay by Macero -- the new, expanded edition includes three bonus cuts, all of them long jam-session pieces: "Rude Old Man," "Who Said That" and "Watusi Drums." The sound is pristine yet warm, the expanded liner notes make for excellent reading, and most of all, when grouped this way, these five recordings offer a story: a progression and a synthesis of how time and jazz were synonymous to stretch one another to the breaking point and then become something else, apart and together, in the larger context of modern music. Brubeck's studies with Darius Milhaud and Desmond's revisioning of the blues are intertwined on these discs, making for a portrait at once very strange, yet lush and haunting, and almost nostalgic -- like these stretches were meant to be all along. This is easily the high point of the Brubeck reissue series. 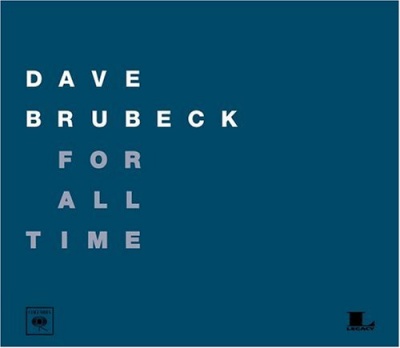 For All Time Album Information