To some Christian fundamentalists, the term "Christian metal" is an oxymoron. They argue that headbangers glorify decadence, promiscuity, and everything else that religious people should avoid--so how can you be a Christian and a headbanger? But metal, like any other form of music, is what the artist chooses to make it. Sure, metal lyrics can be about sex and drugs and rock & roll, but that is hardly mandatory -- a headbanger could also write about anything from political issues to Hinduism and the Bhagavad Gita. For Guardian, metal and hard rock were a way to promote Christianity; this 1990 release combines a Christian message with a slick, glossy pop-metal sound á la Bon Jovi and Def Leppard. Fire & Love doesn't have Bon Jovi or Leppard's hooks, but it's generally decent, if a bit uneven. One thing that probably explains why this CD is mildly inconsistent is the fact that Guardian had been through so many personnel changes; by the time Fire & Love was recorded, the band's four-man lineup included only one original member (bassist David Bach) and three more recent additions: lead singer Jamie Rowe, guitarist Tony Palacios, and drummer Karl Ney. So the new lineup was probably experiencing growing pains in 1990; nonetheless, one hears potential on tunes that range from the single "Power of Love" to the power ballad "Never Say Goodbye." Although Fire & Love has a Christian outlook, Guardian isn't in-your-face about it and doesn't beat listeners over the head with its message (which explains why MTV didn't find the band objectionable). Is Fire & Love Guardian's best release? No, but it has more ups than downs and successfully demonstrates that a Christian message and a pop-metal/hard rock sound are not incompatible. 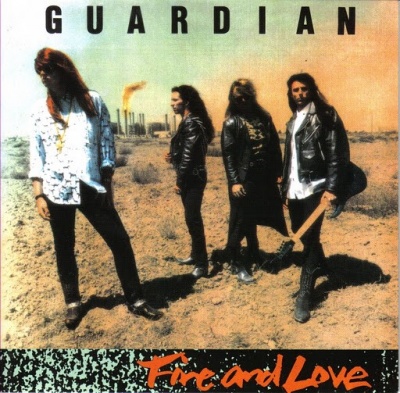