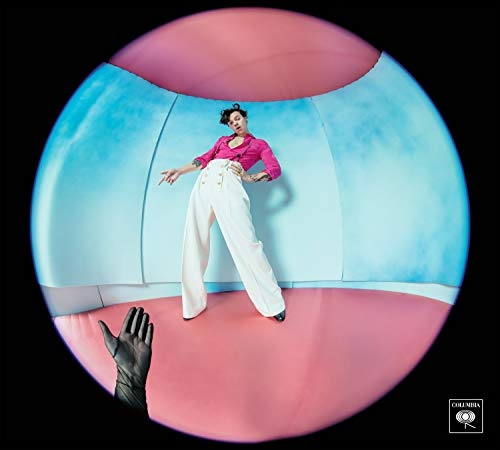 After debuting with a solo album that showed great promise and staked a claim for him as a serious pop force outside of One Direction, Harry Styles changed things up on 2019's Fine Line. Despite working with some of the same people who helped him tap into classic pop and rock influences on his debut, this time around the range of genres Styles dips into has grown to include the kind of warm '70s-inspired funk of Childish Gambino's "Awaken, My Love!" on the lovely "Watermelon Sugar," the expansive baroque chamber folk of Bon Iver on the title track, happily rustic Americana ("Canyon Moon"), and up-tempo Mark Ronson-style retro soul ("Treat People With Kindness"). There's no epic centerpiece like "Sign of the Times," no rambling, strutting rock & roll, but there is a much smoother sound overall thanks to the buffed-to-a-gleaming-shine production. Indeed, a large chunk of the album sounds like it was designed to fade into the background as it streams on repeat. Tracks like "Lights Up" and "Cherry" are inoffensive and sweet, only saved from the skip button by the always impressive vocals. Styles proves again that he's a first-rate singer, able to express melancholy or joy with the same charming ease and disarming power. It's too bad his producers didn't always give him a more interesting background. One of the songs that does stand out is "Sunflower, Vol. 6," a bubbling electro-pop trifle produced by Greg Kurstin featuring some nice electric sitar and clavinet work. It's one of the few tracks where Styles loosens up and has some fun, something that happened quite often on his debut. Apart from that song and a few others that really connect -- like the sleek and streamlined "Golden," "Watermelon Sugar," and the dramatic (also very Gambino-styled) late-night soul ballad "She" -- most of the album feels it's on cruise control, when a Harry Styles album should pop with fun and excitement. Maybe it's a matter of finding the styles and sounds that really work for him, then digging into them in order to come up with his own take on them. He certainly talks like he wants to make music that stands the test of time and really matters to people; if that's ever going to happen, he'll need to make records that go beyond pleasant and enjoyable. Despite the handful of songs that touch on his potential for greatness, Fine Line isn't quite there yet.