When the first version of this impressive box set was originally released in 1991 (as Forty Years: The Artistry of Tony Bennett), it put the capstone upon Tony Bennett's remarkable return to prominence by looking back at a legacy that had been overshadowed by that of the colossus Sinatra. The collection methodically traced his career from his first Columbia record, "Boulevard of Broken Dreams," in 1950, through the hit singles and key or capriciously selected album tracks up until 1972. Then, after borrowing three tracks from Fantasy's 1975 Tony Bennett/Bill Evans project (including an exquisite "Some Other Time" with a "Peace Piece" introduction from Evans), the box leapt ahead 11 years to contemplate Bennett's unlikely resurrection as an icon of the cynical young. From there, Fifty Years departs from its predecessor by adding a fifth disc which, at 23 tracks, boosts the total from 87 to 110 tracks. Bennett's unlikely popular success during the '90s and 2000s is surveyed with a parade of Grammy winners, including selections from 1993's Perfectly Frank, 1994's Steppin' Out and MTV Unplugged, 1999's Bennett Sings Ellington: Hot and Cool, and 2002's A Wonderful World (among others).

Bennett's early records are almost operatic in feeling, a honey-smooth Italian tenor building toward histrionic climaxes, but the voice eventually busts loose into an outgoing, life-celebrating baritone, and, by the 1980s, reemerges as a darker, softer, even somewhat raspy replica of itself. There isn't much for the jazz listener here other than an occasional session with Count Basie (dig their ebullient "Lullaby of Broadway" together), a few cameos by jazz names, the Evans tracks, or some upbeat charts by Ralph Sharon, Ralph Burns, and a few others. Ultimately, the most striking difference between Bennett's records and Sinatra's is the sheer, unbeatably high quality of arrangements that Sinatra was able to get. Yet despite the abundance of period MOR treacle, many of these records are more interesting than memory recalls; for example, it's difficult to resist such a naïvely joyous track as Frank DeVol's rendering of "Put on a Happy Face" that has the Mitch Miller era written all over it. There is no better Tony Bennett retrospective at any price, although jazz specialists might be better served by the Jazz compilation. 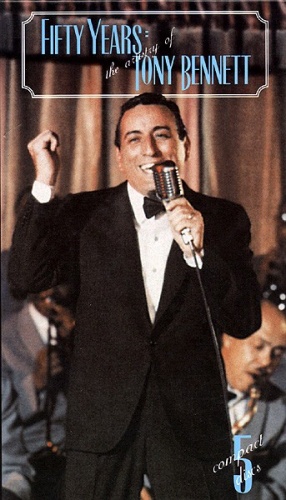