Although the Byrds' Fifth Dimension was wildly uneven, its high points were as innovative as any rock music being recorded in 1966. Immaculate folk-rock was still present in their superb arrangements of the traditional songs "Wild Mountain Thyme" and "John Riley." For the originals, they devised some of the first and best psychedelic rock, often drawing from the influence of Indian raga in the guitar arrangements. "Eight Miles High," with its astral lyrics, pumping bassline, and fractured guitar solo, was a Top 20 hit, and one of the greatest singles of the '60s. The minor hit title track and the country-rock-tinged "Mr. Spaceman" are among their best songs; "I See You" has great 12-string psychedelic guitar solos; and "I Come and Stand at Every Door" is an unusual and moving update of a traditional rock tune, with new lyrics pleading for peace in the nuclear age. At the same time, the R&B instrumental "Captain Soul" was a throwaway, "Hey Joe" not nearly as good as the versions by the Leaves or Jimi Hendrix, and "What's Happening?!?!" the earliest example of David Crosby's disagreeably vapid hippie ethos. These weak spots keep Fifth Dimension from attaining truly classic status. 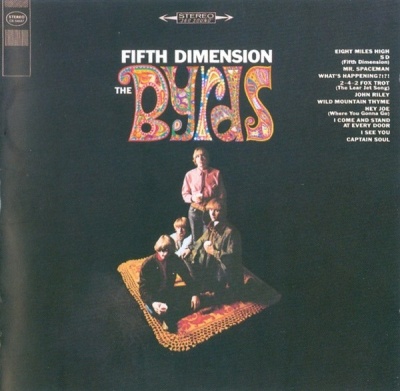