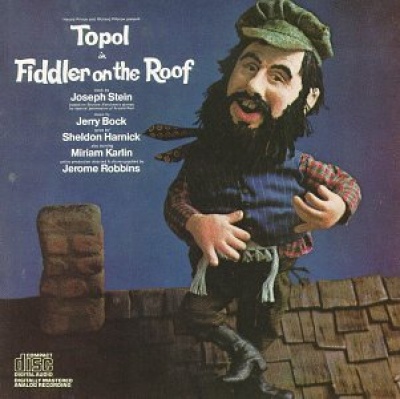 Despite the Broadway success of Fiddler on the Roof, the London production was a while in coming, not opening in the West End until February 16, 1967, almost 29 months after the New York premiere. When the show arrived, however, it became a major success, running 2,030 performances and becoming the ninth longest running musical in London history. The key difference from the New York version was Israeli actor Topol, who played the lead character, Tevye, in a far less humorous style than Zero Mostel had on Broadway. Perhaps more noticeable on record than on stage, and far more noticeable to American ears than English ones, Topol's unique mixed accent -- a cross between French and Hebrew speaking American English combined oddly with the many British accents of the other cast members, which themselves often seemed strange in this show. Granted, as in New York, the actors were pretending to be Russian Jews, but at least on Broadway everyone sounded like New York Jews. In London, the proper, upper-class tones of the actors sometimes added unfortunate flavorings to the portrayals, especially in the company of Topol. For example, in "Far From the Home I Love," Linda Gardner didn't sound so much like Topol's daughter as she did like a member of the royal family. That said, this cast album is really the one for people who like Topol, far superior to his somnolent performance in the film version. The 2001 CD reissue adds as bonus tracks a series of early sketches of tunes from the show performed by composer Jerry Bock that provide fascinating glimpses into the creative process. Bock and lyricist Sheldon Harnick also perform their first try at an opening number, "We Haven't Missed a Sabbath Yet," which contains a bridge that turned into the real opener, "Tradition."