MC5 fans looking at this installment in BMG's budget-priced Extended Versions series might find themselves wondering, "Just when did the MC5 record for a BMG-affiliated label?" And the answer is, they didn't -- Extended Versions pulls ten tracks from the live compilation Motor City Is Burning, which was first released in Europe in 2000 and licensed by BMG for this release. While a fair amount of live MC5 material has hit the market in recent years (mostly through Alive/Total Energy Records with the cooperation of the band's former manager, John Sinclair), this set is decidedly below the average; while the band inarguably kicks out the jams on these tracks, sounding big and powerful as always, and the long unreleased "Revolutionary Blues" and "Black to Comm" make the cut (as well as a cover of "Born Under a Bad Sign"), the sound quality is just plain awful throughout. Most of these cuts sound like they were recorded from the audience using a low-grade, hand-held recorder, and the results are hollow, tinny, and poorly balanced; what's more, no one has bothered to correct the speed faults that drop the tempos (and Rob Tyner's voice) in the last third of the set. Given its low price, this isn't a bad buy for completists and hardcore fans, but Extended Versions is mostly of interest for curiosity value rather than listening pleasure, and if you're looking for a quality live MC5 album, Kick Out the Jams happens to still be in print and will blow minds and eardrums from front to back. This disc will mostly make you wish a competent recording engineer had brought his gear to this concert. 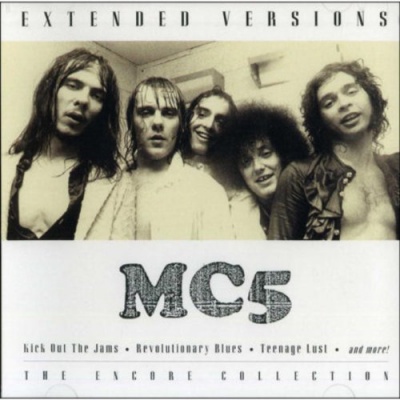