Example was For Squirrels' debut album, but also, due to the tragedy which killed two of the bandmembers in 1996, it was the only album that featured their original lineup. Musically, R.E.M. casts a huge shadow over Example, with its jangly guitars and glorious melodies. Indeed, John Vigliatura's singing sits comfortably somewhere between Michael Stipe's drone and Sunny Day Real Estate frontman Jeremy Enigk's nasal whine. Several of these songs are gems, with simple verses blossoming into truly memorable choruses: "8:02 PM," "Orangeworker," and "Under Smithville" are three of the best examples. The outstanding track in this set is without a doubt the superb "Mighty K.C." While ostensibly a tribute to Kurt Cobain, the track takes on a special significance given the fate of For Squirrels. It is a sad, bitter irony to hear Vigliatura sing the gorgeous chorus "And by the grace of God go I/Into the great unknown/Things are going to change in our favour." Where Example fails, however, is when Vigliatura allows his vocals to descend into screaming -- "Superstar" and "Long Live the King" are particularly marred by this. Example should have been described as a promising debut, but that wasn't to be, at least in this incarnation of the band. Instead the album stands as an imperfect offering from a group that may have been able to deliver more later in their career. 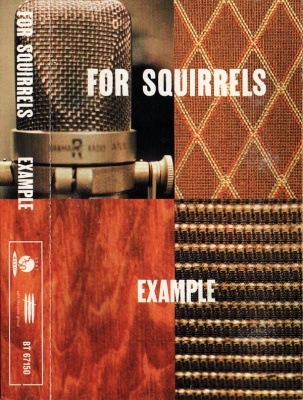