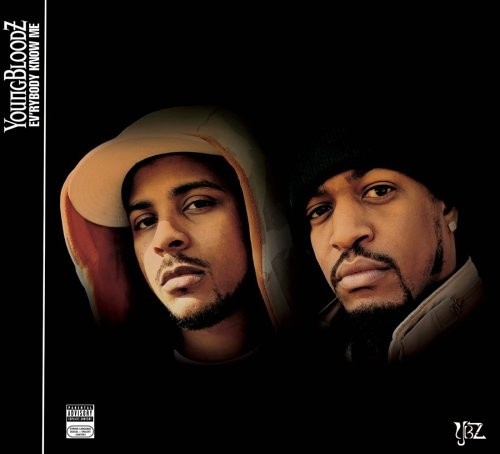 Drankin' Patnaz, the 2002 YoungBloodZ album, arrived right in the midst of the initial crunk uprising, and it helped push that style into mass public consciousness in a major way, with the Lil Jon-produced "Damn!" breaking into the Top Five of Billboard's Hot 100 -- a noteworthy milestone at the time. But three years later, in 2005, "crunk" had become the new "bling-bling" -- a trendy rap style that proliferated at lightning speed, to the point where its sudden omnipresence reached the point of parody, and indeed, snarkier pop culture commentators were quick to lampoon it just as they had "bling-bling." Ev'rybody Know Me arrived around this time, in December 2005, and it pales in comparison to its predecessor. What a difference three years make! YoungBloodZ haven't changed much in those three years. They're still the same rambunctious Atlanta duo they were before -- witty, grimacing Dirty South rappers with a taste for cush and candy-paint cars, white Ts and white wheels, drank and stank. But while they sounded cutting edge in 2002, they sound middle of the pack in 2005, and that's despite working with many of the same producers as last time. Of course, there's a mammoth Lil Jon production here that stands head and shoulders above every other song on Ev'rybody Know Me: "Presidential." From the opening synth stab, it's obvious that this is straight from the lab of the King of Crunk. There's a lot that's amazing about this song, from how YoungBloodZ make "George Bush" seem like a dope name to drop ("What we smokin'?/That cush/Presidential sh*t/George Bush") to how Lil Jon's endlessly recycled production style remains powerful. But there are 15 other songs here, and none of them comes close to matching the appeal of "Presidential." Not even A-list producers such as Scott Storch, Jazze Pha, Mannie Fresh, or Mr. Collipark can conjure up a fresh song idea. Rather, each of these well-paid producers turns in a third-rate retread: Collipark's "It's Good" sounds like a "Wait (The Whisper Song)" remix, Fresh's "What tha Biz (If I)" sounds like a "And Then What" remix, and so on. The exception would be Storch's "Chop Chop," which does sound fairly unique; it just doesn't quite work as well as it should. Anyhow, there's not a lot of use in overexamining why Ev'rybody Know Me feels disappointing. In sum, it's a run-of-the-mill crunk album with a killer single, an album that doesn't come close to matching its relatively superb and much fresher predecessor.