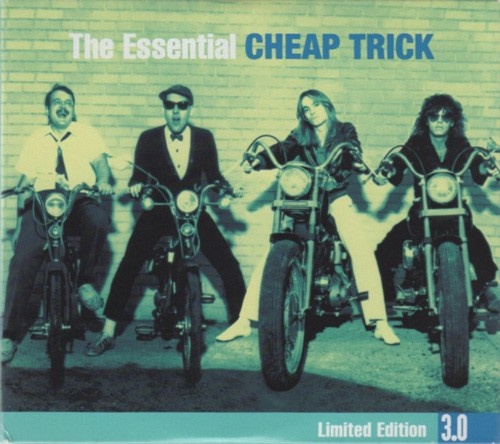 Since both fans and critics agree on what Cheap Trick's core canon is, from the first three albums to the highlights that followed, it seems like it would be a fairly easy job to assemble a good overview of the band. History has proven that theory wrong several times. 1991's Greatest Hits largely ignored the first three albums, the 1996 box set Sex, America, Cheap Trick was a rarities-filled extravaganza pitched at the converted, and while 2000's Authorized Greatest Hits was a notable improvement on the first compilation, it had some puzzling inclusions, including substituting alternate takes and live cuts for original single versions. So, there was a need for a new collection, one that got it right. Enter The Essential Cheap Trick, the band's installment of Sony/Legacy's largely excellent Essential series. Spanning two discs and 36 tracks, it is the most generous hits collection yet assembled, but it still falls short of being a definitive overview. Again, there is a considerable problem of substituting alternate versions for the original studio versions; it is toned down from Authorized Greatest Hits, but when the fourth song in is a live version of "Mandocello" from 1998, with guest guitarist Billy Corgan, the momentum is knocked off-track immediately. Then, the song selection is a little idiosyncratic, which is often the case with artist-selected compilations, which The Essential Cheap Trick is. While the classic first three albums are represented well -- indeed, the entire first disc is devoted to '70s material (well, there are the two live tracks from 1998, but they're '70s songs) -- some fans will inevitably find a favorite or two missing, including "Oh, Candy" and "Oh Caroline," and "How Are You?" The real problem is that the collection loses steam on the second disc, which covers the '80s and '90s. The band has chosen to bypass several charting singles for album tracks, which may frustrate some chart-bound listeners, but it does make for a disc that's stronger overall. Still, it's hard to deny that the material on the second disc is simply not as good as that on the first, which makes this collection a bit too lopsided to be consistently enjoyable. Nevertheless, that first disc makes for very good listening (apart from the 1998 tracks, that is) and, overall, it gives a good sense of the band's history, even if any of the first three albums and Live at Budokan remain the best introductions to the band. [The 2010 reissue features a bonus third disc that adds seven more tracks, including "Heaven Tonight," "On Top of the World," and a live version of "Big Eyes."]