Equal Rights was to be the album that propelled Peter Tosh to the top of the reggae world -- the rival to onetime fellow Wailer Bob Marley. Time has shown that this lofty aspiration was not borne out, but Equal Rights remains among the handful of best, and most influential, reggae albums ever recorded. Tosh was always the most militant of the original Wailers and this album reflects that outlook. Whether it is preaching about the unity of the African diaspora ("African"), protesting conditions in South Africa ("Apartheid"), or giving a more general call to arms ("Get Up, Stand Up"), Equal Rights is a political album. This is at times crippling, as some tracks are more effective as political statements than they are as songs. This, in fact, is a primary difference between Tosh and Marley -- Marley's political statements never overwhelmed his songs. Unfortunately, this is not always the case with Tosh. That being said, "Downpresser Man" (based on a folk standard), "Stepping Razor," and his definitive version of "Get Up, Stand Up" are as good a trio of songs as you will find on any album, reggae or not. Tosh's singing is angry and forceful and the music is intricate and distinctive. On these three tracks you can see why people thought that Tosh could become a transcendent international star. The rest of the album, however, shows why he never quite lived up to that potential. 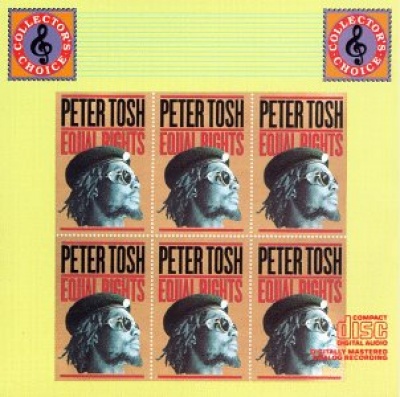