Calle 13 kick off Entren los Que Quieran in exactly the same manner they did their previous two albums, with a parody intro, this time around a raucous send-up to their own record company set to a mock show tune theme, complete with several over the top vocalists. It immediately segues into the abrasive single "Calma Pueblo," a rampant tirade against the powers that be (which in Calle 13's world are quite a few, and often fairly specific -- namely, the government of Puerto Rico, inauthentic artists, the entertainment industry, multinational corporations, and the Vatican), the violence of the words matched at every turn by the vicious guitar of the Mars Volta's Omar Rodriguez-Lopez. By the third track, it's time to hit the dancefloor, with the sassy Bollywood-meets-Caribbean "Baile de los Pobres," a trademark Calle 13 party hit. So far, absolutely spectacular. The rest of the album is by no means a letdown, but little by little the problems inherent in Calle 13's commanding discourse begin to appear. As with most acts that deal largely in controversy, Calle 13's songs are seldom more impressive than upon first listen. As the album progresses, while the beats remain strong and the lyrics clever, this maximum-impact approach tends to eventually exhaust itself. Admittedly, there is a marked effort to introduce enough musical variety, as Eduardo Cabra's tracks have long escaped the confines of reggaeton. Entren los Que Quieran excitingly mixes cumbia, merengue, funk, reggae, rock, and hip-hop, as well as boasting collaborations from icons of Latin American music such as Argentine producer Gustavo Santaolalla and vocalists such as Brazil's Maria Rita, Peru's Susana Baca, and Colombia's Totó la Momposina, as well as the aforementioned Omar Rodriguez-Lopez. Yet, there is no denying that Residente's absolutely overpowering raps are what make Calle 13 so special, and will always take center stage to the point of rendering the background almost negligible by comparison. He is in fine form on Entren los Que Quieran, now more concerned with politics -- check the scathing attack on the major of San Juan on "Digo Lo Que Pienso" -- than sex (for a reggaeton/hip-hop album, it is refreshingly devoid of woman bashing), typically alternating brilliant rhymes with messianic or contradictory statements. For all of his word wizardry, his logorrheic delivery and choice topics do become repetitive in the long run -- and by now we are on the fourth Calle 13 album. Entren los Que Quieran is another strong addition to a proud discography, one that almost single-handedly elevates the artistic credibility of reggaeton. Make no mistake, Calle 13 are still miles above their peers and countless imitators, but unless they introduce some radical change to their approach (singing, perhaps?), it is unlikely they will ever surpass the shock value of their early work. 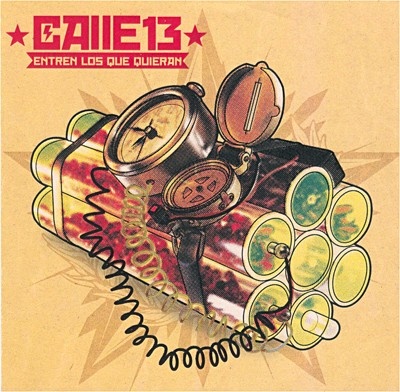