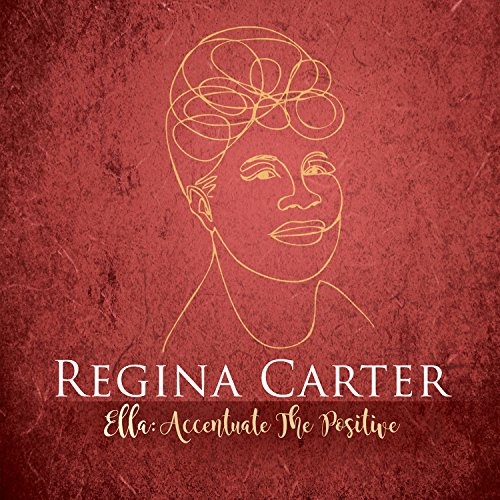 One of the key ingredients to making a successful tribute album is to try evoking your love of the artist's original work, while keeping the focus on your own distinct personality, taste, and skill. In that sense, violinist Regina Carter succeeds in both honoring legendary vocalist Ella Fitzgerald and showcasing her virtuoso jazz talents on 2017's sophisticated Ella: Accentuate the Positive. Her second album for Sony Masterworks and first attached to the Sony imprint OKeh Records, Ella: Accentuate the Positive find the Detroit-born Carter exploring songs strongly associated with Fitzgerald. For longtime Carter fans who have enjoyed her deeply personal, stylistically cross-pollinated albums like 2010's Reverse Thread and 2014's Southern Comfort, this album will feel pleasingly familiar. Smartly, aside from the ebulliently rendered title track and several other time-tested favorites ("Dedicated to You," "Undecided"), Carter has chosen a handful of songs Fitzgerald recorded, but which aren't the most obvious picks from her catalog. Additionally, while Fitzgerald's preferred style of playing straight-ahead swing is certainly in Carter's wheelhouse, it is not the main stylistic focus here. Instead, we get a the title track featuring vocalist Miche Braden reworked from vintage swing into an airy and brisk progressive fusion-influenced number that's more Chick Corea than Billy May. Similarly, Carter transforms "All My Life" (originally recorded by Fitzgerald and Teddy Wilson in 1936) into a flowing, languid, '70s R&B-inflected ballad held down by Xavier Davis' deft Fender Rhodes accompaniment. Elsewhere, Carter achieves equally compelling results turning Fitzgerald's already gorgeous and yearning 1960 ballad "Reach for Tomorrow" into her own dreamy midtempo soul anthem and utterly transforming '30s swing standard "Undecided" into an expansive, funky blues-fusion groover featuring vocalist Carla Cook. That said, there are still plenty of hardcore acoustic jazz moments here, including an urbane and poignant reading of "Dedicated to You," featuring a jaw-droppingly beautiful solo turn by bassist Chris Lightcap, not to mention one of Carter's most vocal-like and heart-wrenching performances. She also keeps things nicely pared down for Hoagy Carmichael's "Judy," played here as a lively yet intimate acoustic duet with guitarist Marvin Sewell. As the title implies, Ella: Accentuate the Positive is a tribute album imbued with Carter's obvious love for Fitzgerald, but which accents everything that makes the violinist such a compelling, distinctive performer in her own right.