This is the album where Jeff Lynne finally found the sound he'd wanted since co-founding Electric Light Orchestra three years earlier. Up to this point, most of the group's music had been self-contained -- Lynne, Richard Tandy, et al., providing whatever was needed, vocally or instrumentally, even if it meant overdubbing their work layer upon layer. Lynne saw the limitations of this process, however, and opted for the presence of an orchestra -- it was only 30 pieces, but the result was a much richer musical palette than the group had ever had to work with, and their most ambitious and successful record up to that time. Indeed, Eldorado was strongly reminiscent in some ways of Sgt. Pepper's Lonely Hearts Club Band. Not that it could ever have the same impact or be as distinctive, but it had its feet planted in so many richly melodic and varied musical traditions, yet made it all work in a rock context, that it did recall the Beatles classic. It was a very romantic work, especially on the opening "Eldorado Overture," which was steeped in a wistful 1920s/1930s notion of popular fantasy (embodied in movies and novels like James Hilton's Lost Horizon and Somerset Maugham's The Razor's Edge) about disillusioned seekers. It boasted Lynne's best single up to that time, "Can't Get It Out of My Head," which most radio listeners could never get out of their respective heads, either. The integration of the orchestra would become even more thorough on future albums, but Eldorado was notable for mixing the band and orchestra (and a choir) in ways that did no violence to the best elements of both. 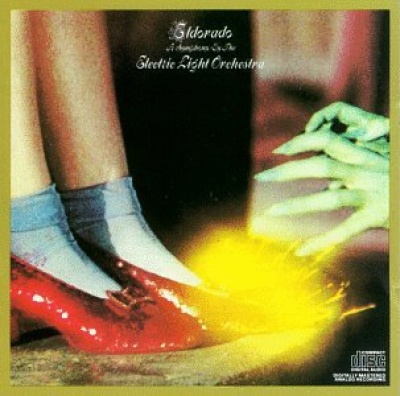