What a bummer to have your finest hour left for dead. When Swervedriver delivered the tapes for their third and best record to U.S. label A&M, they were told that they'd have to wait over a year to see it released. Due to a busy release schedule, the label balked on issuing it in a timely manner. Frustrated, the band ended up splitting with the label. Treatment wasn't much better with their U.K. label. Creation was nice enough to release Ejector Seat Reservation, but the record received nothing outside of a couple small ads promotion-wise, and the band was dropped a week after its release. Since Creation was making the bulk of its Swervedriver money from licensing the band in the States, there was no need to keep them around if they didn't have a U.S. label, right? (What does the music matter, anyhow?) Clocking in at just over 40 minutes, Ejector Seat Reservation is the band's most cohesive and concise record, best experienced in whole. The band scales back the roar of Mezcal Head and points to their classic pop and glam influences; "Bring Me the Head of the Fortune Teller" is the only completely blasting thing here. Otherwise, it could pass as another band to a casual listener. Even the most gnashing moments are more melodically driven than previous outings (Mezcal Head's "Blowin' Cool" is a good reference point). Those who thrilled over the band's badass, Stooge-ified sonic assaults might not know what to think of after a couple listens, but taken on its own context, the record ropes you in just as tightly as anything else they've done. Helping the band reach new pop heights is the expanded range of Adam Franklin's voice. Check the upper register on the Love-y acid trip "Son of Jaguar 'E'" and the gentle, graceful croon on "Last Day on Earth." A T. Rex/Sweet-like shuffle pops up in the title track, with more hallucinatory lyric imagery. The vocal hook from Bacharach/David's "Do You Know the Way to San Jose" gets cleverly nicked for "Candy," a song that's possibly their best fusion of overload guitars and singalong chorus. It boggles the mind how a song as powerful and melodic as "The Birds" didn't find a home on a radio chart of any form, in any country. Swervedriver effortlessly committed this as if they had it in them all along. 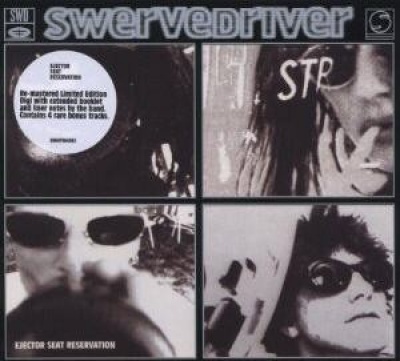