Julia Roberts followed Pretty Woman with the pretty depressing Dying Young. If your girlfriend/wife had to drag you to this film, rest assured you can opt out of buying the soundtrack. Like the film, James Newton Howard's score is life-affirming, romantic, and touching. Cameos from Kenny G, Jeffrey Osborne, and King Curtis are woven into Howard's modest tapestry, and the sum effect feels like Checkfield with a sax player and an old Nat King Cole nugget tossed in for texture. The instrumentals are built around piano, acoustic guitar, lush strings, and horns, creating a folky new age feel. At under 40 minutes, Dying Young isn't the self-standing work one might have hoped for, but the soundtrack atones for its shortcomings with a suffusion of beautiful music. Some will dismiss this as schmaltz out of hand, and a compelling argument to the contrary isn't forthcoming, but if the music does no more than indulge a romantic fantasy for half an hour then it's served a valuable purpose. Standout tracks include the opening theme, King Curtis' jazzy take on "All the Way," and the closing "I'll Never Leave You (Love Theme)." A lot of soundtracks don't make the leap from the screen cleanly, limping along in musical fragments like the obligatory chase scene and so on. Not so with this soundtrack, which combines utility and intrinsic beauty; in fact, you don't need to watch the movie to enjoy the music (good news for anyone still hoping to wiggle out of this weeper). Overall a warm, personal, and cleansing experience, like yoga for the brain. 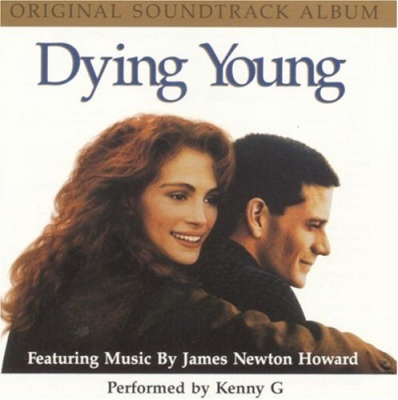