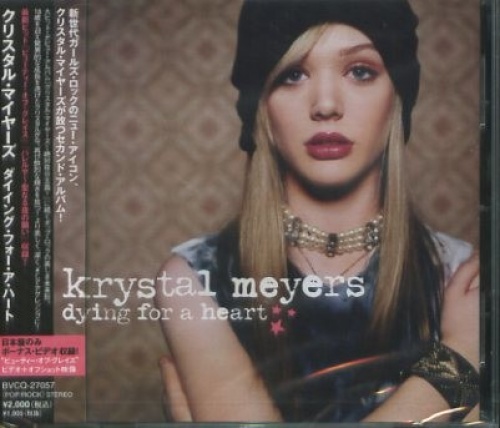 Krystal Meyers wrote material for her second album amidst a whirlwind of activity. Dying for a Heart hit the streets just months after the aspiring rocker graduated from high school, which also happened around the same time as being named a presenter at the GMA Awards, performing with the Winter Jam Tour, and hitting it big in Japan. Her sophomore effort doesn't stray too far from the formula of her girl-power 2005 debut, though it does separate itself further from the Ashlee Simpson pack by kicking up the distortion. You can thank returning producers Ian Eskelin and Wizardz of Oz (Avril Lavigne, Liz Phair) for the extra fuzz. They helped harness the same vivacity as contemporaries like Superchick and Rebecca St. James. Under their guidance, the edgier rock sound fits more forthright lyrical themes. "The Situation" is an upfront commentary on premarital sex from the perspectives of both a young woman and a young man, the first desiring to feel beautiful and the latter attempting to show his masculinity. "Live," "Together," and "Stand and Scream" are exuberant pleas to leave your comfort zone far behind and find purpose in day-to-day activity. The standout pop ballad "The Beauty of Grace" gives the album a well-needed break from the teen anthems, going for a more poignant message of mercy. Meyers proves her staying power in her songwriting; she co-wrote nine of the ten tracks. Ultimately, the album targets well her core audience of teen and preteen girls but falls short of broadening her fan base.