As a broad collection of contemporary urban R&B and pop-rap songs, with a few that fit somewhere between those two related styles, the Dr. Dolittle 2 soundtrack has a little something for everybody. Granted, half of the 13 songs are undeniably in a class above the others, but even the filler here is commendable for its conventional execution at the least. If you're a contemporary urban R&B fan, look toward Angie Stone and Raphael Saadiq's "Makin' Me Feel," O-Town's "We Fit Together," and Deborah Cox's "Absolutely Not," in particular, as highlights. If you're more of a rap fan, there aren't quite as many highlights, but Snoop Dogg and Battlecat's "Do U Wanna Roll (Dolittle Theme)" and Flipmode Squad and the Neptunes' "What It Is, Pt. 2" are arguably the best songs on the entire soundtrack, capable hit singles for sure. The former song -- also featuring Lil' Kim representing the East Coast and R.L. crooning in the background -- is pretty much a straight-up interpolation of Zapp's "Doo Wa Ditty (Blow That Thing)," a feel-good, PG-rated summer song with a catchy sung chorus courtesy of Snoop. The latter finds the Neptunes turning in yet another elastic, bottom-heavy, booty-shaking beat with a infectious chorus sung by Kelis. And if these highlights aren't enough, there are two other noteworthy songs: Next and Lil' Zane's "Lookin' for Love," a fine song illustrating an excellent synthesis of singing and rapping, and Jimmy Cozier's "Two Steps," an otherwise passable song featuring a trendy attempt by producer Soulshock to integrate a 2-step rhythm in the chorus. Overall, though Dr. Dolittle 2 isn't a beginning-to-end collection of standout songs, it has its moments and goes out of its way to offer something of quality for everybody, from the urban crowd to the rap crowd. 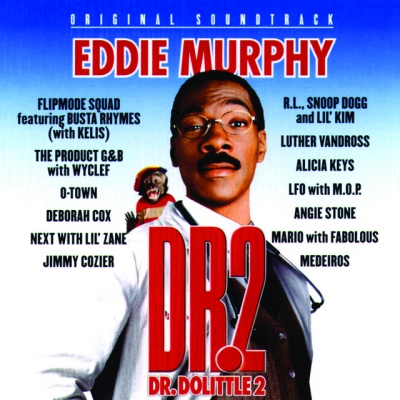