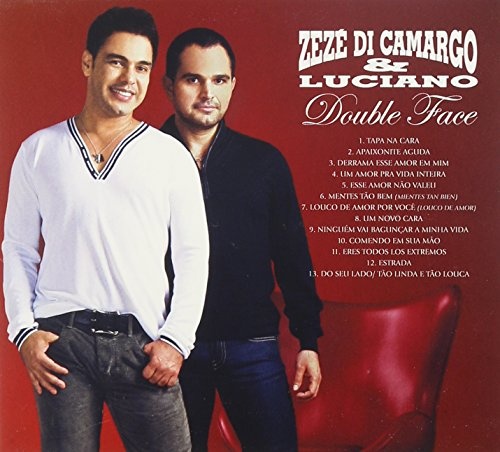 After a 20-year career that proved successful beyond their wildest dreams, with more than 30 million records sold in Brazil, brothers Zezé Di Camargo & Luciano can afford to indulge in their personal little pleasures. With its self-explanatory title, Double Face is a double album that showcases two sides of these most popular of sertanejo artists (roughly the Brazilian equivalent to country music). The first disc is a regular studio album, introducing 15 new songs led by the single "Tapa Na Cara," previously recorded by another sertanejo duo, Marcus Vitta & Daniel. The second disc, on the other hand, is a covers album, where Zezé Di Camargo & Luciano proudly present their own versions of 14 classics of the genre that came before their time, such as "Telefone Mudo" and "Noite de Tortura." There is a noticeable musical schism between both discs, as the covers record is entirely performed on traditional instruments of the genre such as the sanfona, whereas the new compositions are performed with their full electric band. As a result, the listener ends up with one album of traditional folklore and another of contemporary pop. Neither is noticeably better than the other, as Zezé Di Camargo & Luciano play a simple and sentimental brand of music, full of emotive singing, trite lyrics, and little originality or variety. The generous Double Face will certainly please Zezé Di Camargo & Luciano's millions of Brazilian fans from different generations. International audiences may only ponder as to why MOR music feels (if not sounds) the same in all countries, even in those with such a dazzling musical heritage as Brazil. Double Face was awarded the 2010 Latin Grammy in the Best Sertanejo Album category.