Sprawling across two discs and comprising 24 songs that range stylistically from forceful rockers to moody instrumentals to heartfelt ballads, Dois Quartos is a bold statement of artistic expression by Ana Carolina, who was one of Brazil's most celebrated MPB superstars at the time of the album's 2006 release. She was also the subject of controversy at the time, as she'd recently gone public as a bisexual. This revelation lends an air of curiosity to some of the lyrics of the album, which is tagged with a parental advisory warning about the adult-oriented content. Yet while there's plenty to consider from a lyrical standpoint on Dois Quartos, the scope of the album is most noteworthy. Two uptempo songs ("Nada Te Faltará," "Tolerância") get the album off to a rousing start before "Ruas de Outono," the first of many heartfelt ballads, slows down the proceedings to a meditative lilt that is periodically disrupted by energetic songs such as "Rosas," the album's biggest hit single, and "Eu Comi a Madona," one of several atmospheric mini-songs clocking under three minutes. The second disc of Dois Quartos offers fewer highlights than the first, but beginning with the very first track, a five-minute instrumental, "La Critique," it's more daring, showcasing some of the most experimental music of Carolina's career to date (alongside plenty of ballads, including the single "Carvão"). Fans of Carolina will find plenty to enjoy on Dois Quartos, which not only runs long but sheds new light on the MPB superstar, who either writes or co-writes most of the songs. Longtime collaborator Antônio Villeroy (aka Totonho Villeroy) is once again her primary co-writer. Given its wide range of material, Dois Quartos isn't an ideal starting point for newcomers (that would be the compilation Perfil [2005]), but it's surely a gift to those who want to dig deeper and explore a more challenging side of Carolina's artistry. 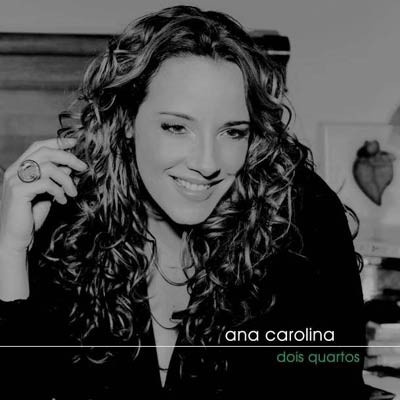