Desensitized doesn't dwell directly on Dave Williams' death. The fallen singer is remembered in the liners, and the band's search for the reason behind his untimely demise seems to drive tracks like "This Life" and "Numb." But for the most part Drowning Pool's sophomore effort takes the band and new shouter Jason "Gong" Jones to places they likely would've anyway. Instead of the blistering pummel of breakthrough hit "Bodies," lead single "Step Up" is a muscular hard rock number with a bona fide hook -- it's closer to the midrange rock hedonism of types like Saliva or Monster Magnet than anything on Sinner. This makes sense, as the spooky and tuneless churn that typified turn-of-the-century active rock has largely given in to rockers capable of both aggression and melody. There are still moments of gritty sludge on Desensitized, amplified (or downtuned, rather) by producer Johnny K, who helps give opener "Think" a dirty sting similar to his work with Disturbed. Late album entries "Cast Me Aside" and "Killin' Me" are better -- they cross a catchy, "Bodies"-like groove with Jones' guttural scream and thick, nearly atonal distortion. But the rest of Desensitized takes the relative tunefulness of "Step Up" (and a hint of Alice in Chains) as a guide, and delivers throaty, catchy hard rock laced with metallic elements. Highlights include "Bringing Me Down" and "Love and War." All in all, a decent second album from a band that's persevered. Too bad about that porn star cover art, though -- it looks like the packaging for the stupidest Seduction Cinema sexploitation film ever. 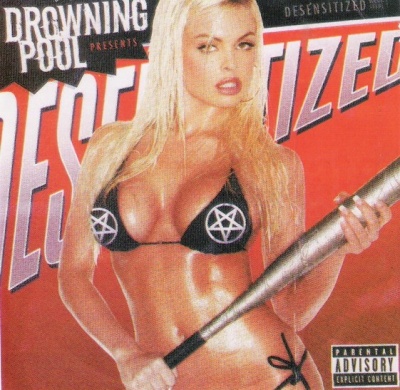