After releasing Ayo in 2017, Bomba Estereo toured the globe for the better part of two years. While traveling Europe by bus in 2019, guitarist and co-producer José Castillo and percussionist Efraín Cuadrado began recording rhythms and vamps for new songs. At home, Simon Mejía built tracks around them and sent them to Li Saumet. She enlisted her friend Lido Pimienta, a Colombian singer/songwriter, to complete the demos. In January 2020, Bomba Estereo and Pimienta, with Mexican singer/songwriter and guitarist Leonel Garcia, Cuban vocal/percussion duo Okan, Colombian and Nigerian Afrobeat singer Yemi Alade, convened at Saumet's beachfront home in Santa Marta on Colombia's Caribbean coast. Out the front door lay the ocean and crashing waves, out the back lay the sprawling jungle and snow-capped mountains. The sounds of their environment permeated the recording atmosphere and made their way onto the finished album. The 13 songs that make up Deja were completed by the entire group a few weeks before the world shut down. The set is divided into four sections representing each of the four elements, air, fire, water, and earth. Climate change and ecological concerns are central themes here, but aren't the only ones. Spiritual matters, transcending depression, desire, and the importance of community are entwined, too.

"Agua" opens with Saumet, Pimienta, and Okan harmonizing in a sung chant to invoke the feminine through the four elements. Bubbly synth and a bullerengue rhythm played on hand drums surround the singing and Saumet's rap, appended by sub-basslines, bird song, and ocean waves. The title track lays out a pronounced four on the floor as Saumet and Pimienta climb above popcorn synths, pulsing chords, vocoder, champeta guitar, and drum loops to deliver a lyric about leaving clinical depression behind. "Como Lo Pedi" commences with a charango, skittering beats, and double-timed kick drums. Cascading harmonies and chants assert the refrain before Garcia enters with a sultry, smoky tenor amid sampled wood flutes and beats. Champeta grooves collide with the slippery vocals of Saumet and Alade atop house and Afro-Latin beats in the "Conexión Total" a dancefloor celebration of desire and love. "Tamborero," an orgiastic celebration of organic and sampled Colombian polyrhythms collide with studio effects in nearly rhapsodic parlance. A sumptuous weave of melodic electric guitars, hand drums, and drum machines frame Saumet's soaring vocal in "Lento." "Tierra" offers electrified, distorted marimbas and kalimbas, gaitas, and loops under electric pianos and sub-bass while framing Saumet's sorrowful vocal elegy for planet earth. Bumping house and cumbia beats collide with female chants in "Amor Amor," while in "Ahora," jazzy keys meet organic and looped beats around Saumet's affirmative mantra about being and rebirth. Deja is a major leap forward for Bomba Estereo. The lush production is warm and detailed. The collective writing approach adds depth and dimension to these captivating, emotionally powerful songs, delivered with cutting-edge experimentation. Throughout, the group's optimism allows them to balance the hope and heartbreak of the human condition with the natural and spiritual worlds. 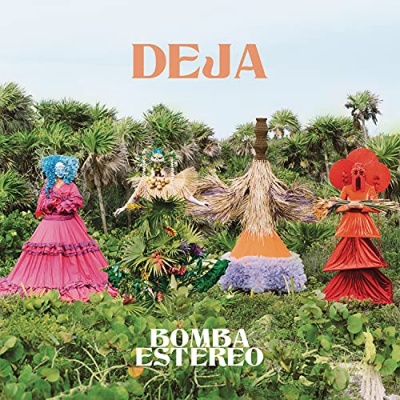