Before Shakira exploded creatively with the superb Dónde Están los Ladrones? in 1998, Gloria Trevi was the most exciting young female star in the rock en Español field. The late Tejano singer Selena, who died in 1995, made some excellent contributions to Latin pop, but she wasn't part of rock en Español; Trevi, however, was relevant to both Latin pop and rock en Español. When someone is as huge as Trevi was in 1989 and the early to mid-'90s, labels are likely to come out with a best-of collection; in Trevi's case, there has been more than one. Assembled by BMG's Latin division in 1996, this 62-minute best-of CD isn't without its shortcomings; some essential tracks are missing and BMG makes the mistake of offering a high-tech dance remix of "Dr. Psiquiatra" (Trevi's new wave-ish breakthrough hit) instead of the original 1989 version. The remix is enjoyable, but the original version would have been much more appropriate for a best-of. Nonetheless, De Pelos: Lo Mejor de Gloria Trevi has a lot going for it. Many of Trevi's essential gems are provided, including the clever "La Papa Sin Catsup" (which banda star Jenni Rivera covered in 2003), "A Gatas," "Los Borregos," and "Zapatos Viejos." While most of the selections were either written by Trevi herself or written for her by various Latin songwriters, there are a few covers as well. "Satisfecha" is a Spanish-language version of the Rolling Stones' "Satisfaction," while "El Ultimo Beso" is actually J. Frank Wilson & the Cavaliers' 1964 hit "Last Kiss" (which was written by Wayne Cochran and is the sort of teen tragedy song that was big in the early '60s). Although not the ideal Trevi best-of, De Pelos paints a generally rewarding picture of the Mexican star. 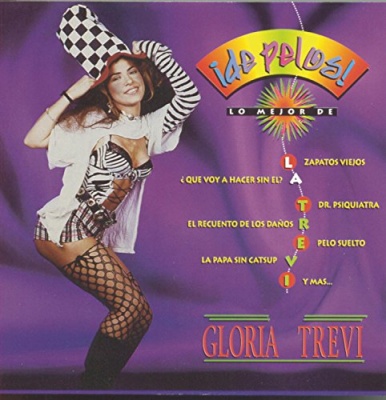