John Barry's fifth Oscar-winning score is a profoundly moving body of music, generally (though not entirely) elegiac in tone, very much like the movie for which it was written. It's also a bit of a mixed bag, occasionally falling back on material that will be familiar to fans of the James Bond movies that Barry scored during the early- to mid-'60s. The main title theme uses some of those devices -- dense, heavy string passages adjacent to trumpet calls -- but it is hardly representative of the full score. The real heart of Dances With Wolves is the pensive, tragic "John Dunbar Theme," which is far closer in spirit to Barry's music for Somewhere in Time or They Might Be Giants -- films (and scores) far removed from the Bond movies. It seems as though, when Barry is asked to write music for characters who are complex and troubled (Bond is neither), he delivers the goods in the guise of musical material that reflects those elements. Some elements familiar from the Bond films can be found scattered throughout this soundtrack, particularly in the violin-driven "stings" that open "The Death of Timmons" and the horn calls that herald its closing; in the string parts underneath the hyperactive percussion of "Pawnee Attack" that might've been lifted right out of From Russia With Love; and also in "Stands With a Fist Remembers," with its secondary violin part in the upper register of the strings. Much of Dances With Wolves, however, shows a broadening of Barry's sound -- he uses the vast canvas of Kevin Costner's movie and Dean Semler's cinematography as the basis for one of the most richly scored soundtracks of his career, working with one of the largest orchestras ever heard in one of his films; "Journey to Fort Sedgewick," "Kicking Bird's Gift," "Two Socks at Play," "The Death of Cisco," and "Journey to the Buffalo Killing Ground" have an almost Copland-like majesty about them, and "The Buffalo Hunt" is one of the finest pieces of music the man ever wrote. At times, it sounds as though Barry had every string and horn player in Los Angeles present, and topped it all out with an oversized percussion section, but none of the music or the scoring here sound excessive. Dances With Wolves was reissued with two bonus tracks in 1995. The 2004 reissue expanded some tracks and added still more material to present the soundtrack "in its entirety." 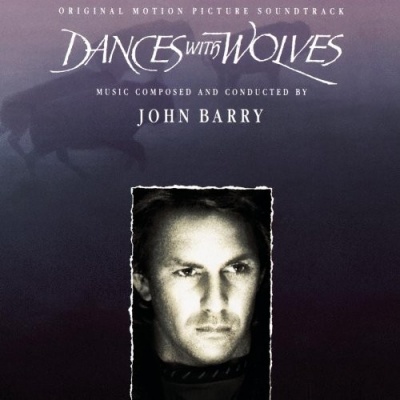