It's hard enough to transform an entire musical genre -- Cypress Hill's eponymous debut album revolutionized hip-hop in several respects. Although they weren't the first Latino rappers, nor the first to mix Spanish and English, they were the first to achieve a substantial following, thanks to their highly distinctive sound. Along with Beastie Boys and Public Enemy, Cypress Hill were also one of the first rap groups to bridge the gap with fans of both hard rock and alternative rock. And, most importantly, they created a sonic blueprint that would become one of the most widely copied in hip-hop. In keeping with their promarijuana stance, Cypress Hill intentionally crafted their music to sound stoned -- lots of slow, lazy beats, fat bass, weird noises, and creepily distant-sounding samples. The surreal lyrical narratives were almost exclusively spun by B Real in a nasal, singsong, instantly recognizable delivery that only added to the music's hazy, evocative atmosphere; as a frontman, he could be funny, frightening, or just plain bizarre (again, kind of like the experience of being stoned). Whether he's taunting cops or singing nursery rhyme-like choruses about blasting holes in people with shotguns, B Real's blunted-gangsta posture is nearly always underpinned by a cartoonish sense of humor. It's never clear how serious the threats are, but that actually makes them all the more menacing. The sound and style of Cypress Hill was hugely influential, particularly on Dr. Dre's boundary-shattering 1992 blockbuster The Chronic; yet despite its legions of imitators, Cypress Hill still sounds fresh and original today, simply because few hip-hop artists can put its sound across with such force of personality or imagination. 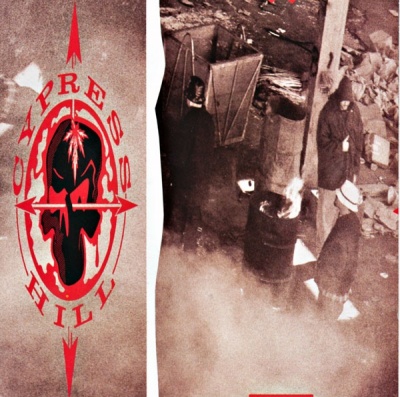