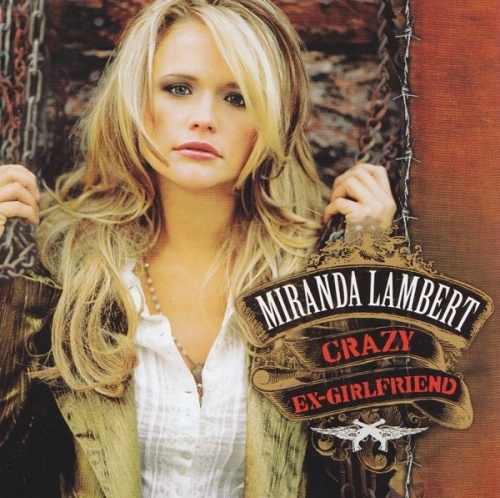 Miranda Lambert didn't win the first Nashville Star in 2003, but she sure is the first bona fide star the televised music competition has produced, as her stellar 2007 sophomore album, Crazy Ex-Girlfriend, proves beyond a shadow of a doubt. Taking her cue from the vengeful spurned woman of "Kerosene," her hit debut single, Lambert has built her second album around a tough-chick persona, something that may be clear from the very title of the album, but this isn't a one-dimensional record by any stretch. Sure, she plays the crazy ex-girlfriend of the title track -- stalking her beau and his new girl to the local bar, which she promptly starts tearing apart -- but that's hardly the extent of her hell-raising here. She takes righteous revenge on a guy who slapped her around on the rocking opener, "Gunpowder and Lead" ("he wants a fight, well now he's got one"), she's stranded without booze in a "Dry Town," and she breaks hearts left and right on the surging, hard-edged "Down," while she searches in vain for a good fling on "Guilty in Here," where she wonders what became of "all the boys that only want one thing." That line reveals that Lambert has a sly sense of humor, but she's not joking around: these are lean, hard-hitting, tuneful country songs, delivered with a classic outlaw strut and a vicious modern punch. If Lambert has a thin, almost girlish voice, she's hardly girly -- there's an edge to her delivery that leaves no doubt that she possess nerves of steel. But for as strong as she sounds on the plentiful rockers here, Lambert also lets her guard down on Crazy Ex-Girlfriend, as she as she soaks her "Love Letters" with tears, sweetly sighs in "Desperation," and sadly wishes she was "More Like Her" as she looks on as her ex-lover returns to his old love. This last song provides a neat flip side to the rampaging title track, which also hints at this album's complexity. There are songs that are larger than life, songs that are achingly intimate, and they all add up to rich artistic statement of purpose that is also a hell of a lot of fun. Miranda Lambert knows exactly who she is as a musician, and nowhere is that clearer than how the three covers here -- Gillian Welch co-wrote "Dry Town," Carlene Carter and Susanna Clark penned "Easy from Now On" (which Emmylou Harris popularized), and Patty Griffin authored "Getting Ready" (also heard on her own 2007 album, Children Running Through) -- blend seamlessly with Lambert's eight originals. Every one of the 11 songs shares the same spirit and Lambert's is strong enough of a writer to hold her own with such heavy-hitters, possessed with a wry wit and clear eye for little details, mining the unexpected from such familiar subjects as love and loss and jealously and rage. Crazy Ex-Girlfriend would have been impressive if it was just a showcase of her strengths as a singer or as a songwriter, but since it is both, it's simply stunning, a breakthrough for Lambert and one of the best albums of 2007, regardless of genre.