Brooks & Dunn began revving up their redneck credentials with Hillbilly Deluxe, a record with no small debt to Big & Rich's gonzo strut, and they continue that path on its 2007 follow-up, Cowboy Town. Despite the title, Cowboy Town doesn't feel that western -- it's a slick, swaggering set of rock & roll, designed for sports bars, not honky tonks. Brooks & Dunn have always teetered between being just a bit too commercial and thoroughly country, but this is one of their efforts where the seesaw tips toward one direction definitively, as this album is as oversized as Texas without sounding a lick like the Lonestar State. Well, there's one exception to the rule -- Jerry Jeff Walker is roped in for a duet on "Ballad of Jerry Jeff Walker," an exceptional homage to his funny, loping signature sound that's easily the best thing here, and not because it's the most country: it's because it's the least mannered tune here. The other highlights on Cowboy Town share a similar wild, wooly spirit, as the duo turns out pretty good Stonesy rockers on "Put a Girl in It" and "Chance of a Lifetime" (which has a nice dip into John Anderson territory on the chorus), grinds out a wonderfully weird slice of ZZ Top boogie on "Drop in the Bucket," and pumps out a deliriously fun "Tequila," whose pumping Farfisa organ on a one-chord riff can't help but bring to mind the Sir Douglas Quintet. All these arrive in the middle of the album, offering a spike of life after it seems that Brooks & Dunn have gotten too mannered with the opening track and the plodding "Proud of the House We Built." And that mannered impression isn't wrong -- Brooks & Dunn have crafted these songs, along with the silly anthem "American Dream" (a song where Merle Haggard, Neil Armstrong, and MLK are shoehorned into one bridge) and "God Must Be Busy" (a litany of destruction and sadness, amber alerts, "the Bloods and Crips are at it...old folks can't afford the drugs they can't live without"), with an eye on the middle of the road, and they do it well enough that this music will likely win them that audience yet again. But it's that section of rowdy rockers in the middle of the album where the duo comes alive, and they're what saves this record from being too studied and dull. 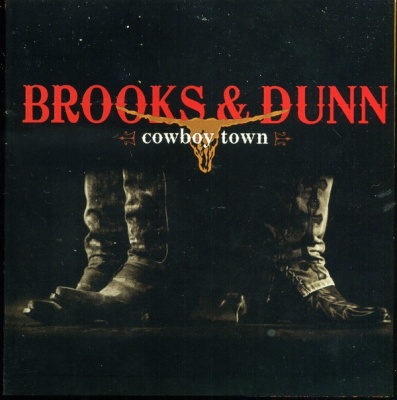