The title of the Red Violin Concerto by John Corigliano may suggest to some listeners that they're getting an expanded version of the composer's music from the successful film, which grew from a recurring motif in the film soundtrack itself to the closely related The Red Violin: Chaconne for Violin and Orchestra. This is not exactly true; the last three movements of the present concerto are newly composed, although they have links to both the action and the musical material of the film. The Chaconne forms the first movement; Corigliano states, honestly enough, that he simply wanted to expand the music to dimensions that would fill out part of a concert program. He was smart enough not to fool with the Chaconne, which dwarfs the other three movements. The work is rounded out with a quietly energetic scherzo, an andante that is a fine specimen of Corigliano's lyrical mode, and most impressively an "Accelerando Finale" containing such novelties as a "crunch" -- a pitchless violin sound created by dragging the bow hard across the strings. Corigliano has tried to make himself into the inheritor of a brash, ambitious tradition, running from Mahler through Leonard Bernstein, in which unabashed sentiment is balanced with a sense of modern chaos, and the three additional concerto movements will give listeners who know Corigliano only through the Red Violin film a good idea of his style. Violinist Joshua Bell has been involved with this music from the beginning, and it's hard to imagine that anyone could play it better. The crisp sentimentality Bell inherited from his violinistic idol, Fritz Kreisler, is ideal for Corigliano's music, as is the vivacious, slightly edgy sound of the Baltimore Symphony Orchestra under Marin Alsop. The early Sonata for violin and piano that rounds out the album is a less distinctive work, but it is brief, and in the nature of something that brings the curtain down. This is a good choice for the listener who wants to try one Corigliano recording. 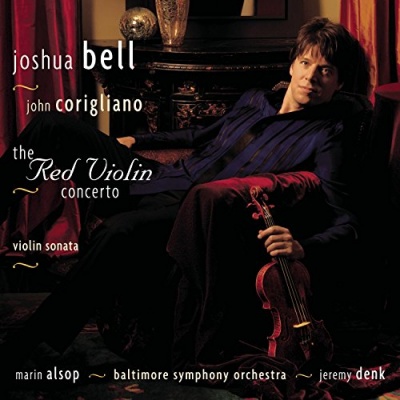