Contraband features Slash, Duff, and Matt Sorum (as well as additional guitarist Dave Kushner) cranking out an updated version of Guns N' Roses swagger behind Scott Weiland's glammy, elastic vocals. With STP's vocalist and such a high percentage of ex-Gunners, Velvet Revolver really is a supergroup. "Went too fast I'm out of luck and I don't even give a f*ck," Weiland spits on "Do It for the Kids," and a peel from Slash's arsenal backs him up. Maturity has clearly come at a price for both parties. Weiland still mugs and sings like a florescent lizard king. But his appetite for the spotlight has somehow become more voracious even as he fights cynically against it, and longs for an escape. For their part, Slash, Duff, and Co. like stirring up their old demons -- check the explosive entrance on "Set Me Free" to get things a-tingling like the old days. But they're not running a nostalgia show, so there are new tricks and sounds, too, and plenty of choruses that shift into STP-style layering and vocal phrasing. The bass-heavy throb of "Big Machine"'s verses surges into a hard-charging '90s alt. rock chorus; "Headspace" alternates representative chunks of both bands' sounds with veteran skill; and "Superhuman" rants about illegal substances in language everyone can understand. Overall, Contraband sounds pretty much like you'd expect of such a collaboration. Lead single "Slither" is an immediate highlight, its gasoline-drinking cocaine strut staining it as the offspring of "Big Bang Baby" and "Nightrain", while the album's detours -- "Fall to Pieces", the gorgeous "Loving the Alien" -- are painted in dusty reds and browns, like idealized fever dreams of escaping to the desert with the one you love. These mediations point to the pain behind Weiland's cynical veneer, and perhaps the entire band's veteran hope for a head-clearing open space. Remember, between them they've probably seen it all. With Contraband, Velvet Revolver pull off something tidy - their music manages both hedonism and maturity. 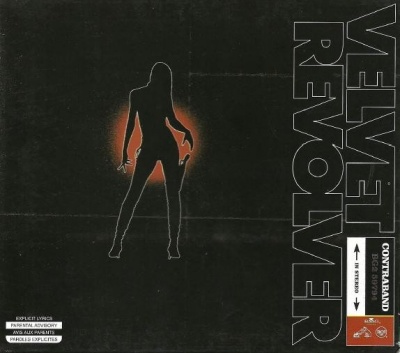