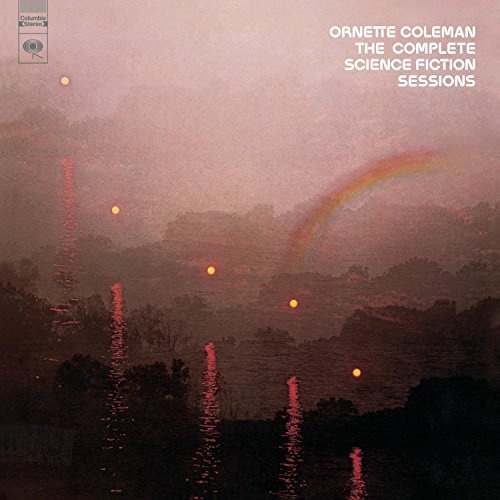 Finally, on a pair of CDs in one collection are the rest of Ornette Coleman's Columbia recordings, all of them done before Skies of America. Science Fiction was a regular part of Columbia's jazz catalogue, and Broken Shadows was released on LP in 1982. On this double set, both of those records and three previously unreleased cuts from those sessions are together at last. Coleman assembled mostly alumni for his September 1971 sessions in the Columbia studios. The sizes of the ensembles range from septet to quartet to up to 11 players. His classic early bands are reunited here with trumpeter Don Cherry, saxophonist Dewey Redman, bassist Charlie Haden, and drummers Ed Blackwell and Billy Higgins. Augmenting these bands in places are pianist Cedar Walton, guitarist Jim Hall, trumpeter Bobby Bradford, vocalist Asha Puthi, and Science Fiction narrator, poet David Henderson. The swinging weirdness quotient is high on Science Fiction, especially on "What Reason Could I Give," "Street Woman," and "Civilization Day." The title track is an out, free-blowing fest that sounds hopelessly dated but is still cool, and on the tracks "School Work," "Broken Shadows," and "Happy House," listeners hear the first traces of the themes Coleman continues to employ. The inclusion of alternate takes offers the listener a cleaner view of the kind of harmonic theory Coleman was working against when he created harmolodics. Some of the oddities on these sessions are the seeming incongruities between Redman and Hall on "Good Girl Blues," with Webster Armstrong's singing with Walton's piano and Coleman just undermining the entire thing, trying to force another dimension out of the blues, or perhaps a new one into them. Elsewhere, on "Rock the Clock," listeners hear Coleman's first experiments with electricity, with a funky backbeat straining to maintain itself against his sawing violin, note-spattering trumpet; then there are Redman's bluesy post-bop chromatics (quoting Brubeck's "Take Five" in his solo) moving atop a funky doubled-up backbeat and one scary amplified Charlie Haden bass. Science Fiction is a stellar collection of Ornette-ology assembled in one place. This is some of his very best material, archived and issued the way it should have been in the first place.