Command Performances, a two-disc, 62-track compilation, completes the survey of Elvis Presley's 1960s recordings begun with From Nashville to Memphis. That box set chronicled Presley's secular non-movie studio recordings of the decade; Command Performances distills his extensive soundtrack work. Since Presley's string of musical comedy films of the '60s and their accompanying soundtrack songs are not among his most critically acclaimed efforts, the album has the challenge of providing a revisionist view, which it does in two ways. First, Susan M. Doll's liner notes attack the criticisms head on. You say the material is slight? You fail to realize the songs are written for the "integrated musical" nature of the films, to advance the plots and explain character. You say the movies themselves are slight? But they must be seen in the context of the other star vehicles of the time, the "beach- and ski-party movies" of Frankie Avalon and others. You complain that Presley's choice of material was restricted to songs from a publishing firm in which he had a financial interest? OK, but what about the top-flight songwriters, like Otis Blackwell and Leiber & Stoller, whose songs were used? It's a brave but largely failed effort to resurrect the reputation of some minor efforts by a major figure. But the second and more successful way the set resurrects the movie music is found in the music itself. Producers Ernst Mikael Jorgensen and Roger Semon have made an intelligent selection of the material. There are hits, including the Top Tens "Can't Help Falling in Love," "Return to Sender," and "Bossa Nova Baby," as well as 15 more Top 40 singles. And there is probably no collection better at displaying Presley's versatility. He can rock out on songs like "G.I. Blues," wax sincere on ballads like "Can't Help Falling in Love," and display his abilities at pop, doo wop, country, and R&B, not to mention Hawaiian and Spanish music. In a sense, the very mediocrity of much of even the best material here is another reflection of Presley's talent: who else could do so much with so little? 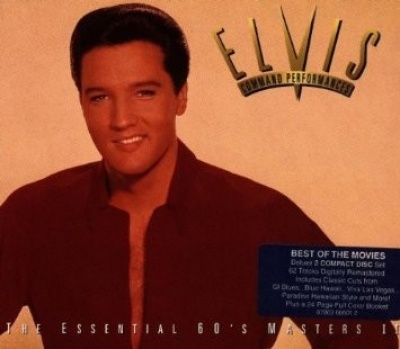