Little did the members of Dove Award-winning Southern rock band Third Day know how timely the title of their November 2001 album, Come Together, would be. A name chosen a year and a half prior to the release date, the five Georgia residents had no idea of the importance the United States would soon be placing on unity, the very theme that underlies the band's fourth studio project, Come Together. Recorded over an 18-month span of time in a makeshift studio transformed from a once loft-style office, Come Together features the band's trademark Southern rock sound supported by frontman Mac Powell's unmistakable vocals. When compared to the band's previous projects, Come Together most resembles the group's self-titled debut album. With this release, however, Third Day -- composed of members Powell, Mark Lee, Tai Anderson, Brad Avery, and David Carr -- has created an innovative and edgy blend of Southern rock, pop, and CCM styles, resulting in a majority of tracks unlike any of the group's prior work. While a couple tracks such as "I Don't Know" do bring to mind pieces from Conspiracy Theory No. 5, Come Together overall is a well-loved sound set to a more finely detailed musical approach. Songs include "40 Days," "Still Listening," and "Nothing Compares." 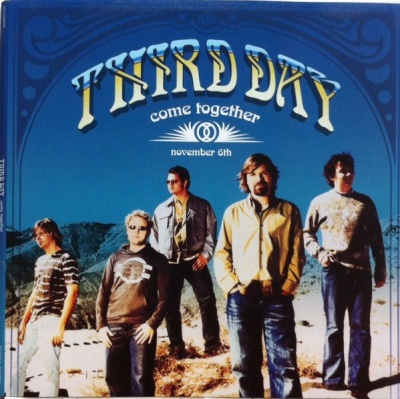