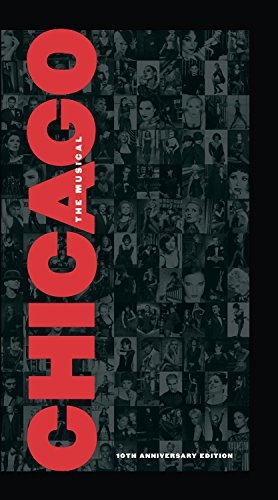 The tenth anniversary edition of the 1996 Broadway revival cast recording of Chicago is a two-CD, one-DVD box set in a 10" x 5 1/2" package containing a 68-page booklet loaded with stylish black-and-white photographs of the various performers who have appeared in the show over the years. The first CD is the 73-minute cast recording as first released in 1997. The second is a 44-minute disc containing demos of cut songs performed by songwriters John Kander and Fred Ebb; excerpts from the original Broadway cast album of 1975; foreign-language recordings; and performances by some of the more recognizable stars who have served as substitutes in different productions, including Liza Minnelli, Brooke Shields, and Melanie Griffith. The 24-minute DVD presents interviews with some of the principals in the revival and collages of international productions done in such countries as Brazil and Russia.

That all sounds like a lot of material, and it is, but the package is really a kind of audio/visual scrapbook that is more miscellaneous than comprehensive and coherent. Although Chicago, based on a 1926 straight play of the same name about a murderess who uses publicity to escape punishment, had a healthy run of nearly one thousand performances on Broadway in the '70s, it really came into its own 20 years later with the 1996 revival, which began life as one of the vintage shows given a semi-staged concert production of a few performances by the Encores! series at New York's City Center. Director Walter Bobbie, in an interview contained on the DVD, acknowledges that he chose the work because he found it timely in the wake of the O.J. Simpson murder trial that had recently concluded, and he was only the first of many to cite that connection. When Kander & Ebb collaborated with Bob Fosse, who directed and choreographed the original production and co-wrote the libretto with Ebb, the Watergate scandal had just rocked the country, Kander notes on the DVD, and Fosse's interpretation of the material was even darker than Bobbie's in the '90s. Kander & Ebb, meanwhile, were in their element. The songwriters of Cabaret had another opportunity to investigate the post-World War I era, Kander to draw upon his favorite styles of hot jazz, vaudeville, and ragtime, Ebb to write his smart, sarcastic lyrics. Twenty years later, the revival might have been seen as less cynical than, as Bobbie says, insightful, given the times. But, as Kander notes, the show did not really change much.

As an homage to Fosse, with outstanding performances and a clever, stripped-down staging, Chicago was hailed in 1996. That doesn't entirely explain why the revival was still running ten years later, however. As a show, it remained relevant in a world in which Simpson-like celebrity scandals were no farther away than the next broadcast of an entertainment news program on TV. But some of the credit for the long, ongoing run must go to producers Barry and Fran Weissler, known on Broadway for their modest budgets and stunt casting of celebrities from beyond the world of musical theater. The Chicago budget was modest from the start, with no scenery and a cast clad largely in black fishnet tights. The stunt casting has become a hallmark. The second CD shows that that hasn't always been a good thing. The likes of Lynda Carter and John O'Hurley, not to mention Shields and Griffith, may draw in curious tourists, but, at least on the basis of these specially recorded tracks, their talents seem only passable. (As the anniversary album was being released, Usher was just completing a limited run as the defense lawyer Billy Flynn; he is not featured on the disc.) Another hallmark has been the ongoing advertising campaign, with the parade of celebrities decked out in skimpy black clothing looking seductive on New York buses and subways. Most of the pages in the booklet are given over to these photographs.

The overall result is a celebration of a wildly successful stage production. (The booklet also contains pages of chronology and statistics documenting that success.) But all of this can seem ironic just from listening to that still-impressive first disc, on which Bebe Neuwirth, Ann Reinking, James Naughton, and Joel Grey savor Ebb's witty words, words that have some very nasty things to say about the state of the world that seemed as true in 2006 as they were in 1926, 1975, and 1996, unfortunately.