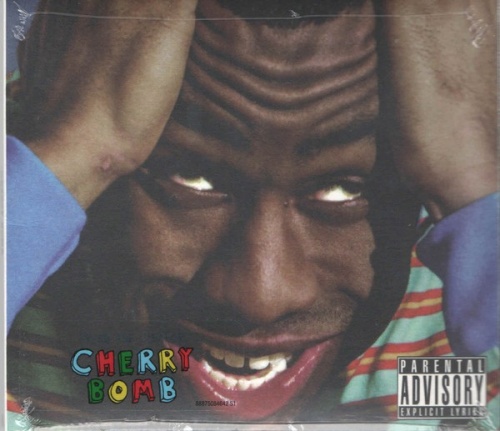 It's hard not to link Tyler, The Creator's effort Cherry Bomb to Earl Sweatshirt's 2015 LP I Don't Like Shit, since these Odd Future-related albums were released less than a month apart; plus, they were both digitally leaked ahead of their official street date. Earl's leak got the wealth of attention, and being the more lean and purposeful machine, it was deserved, but Tyler's long-playing drop is still a joyful noise, kicking with plenty of kinetic energy and coming on strong with an unforgiving OCD attitude that just won't quit. The most beautiful, and meaningless, manifestation of this attitude is the way the smooth and jazzy "Find Your Wings" segues into the drill 'n' bass title track, as muted trumpets, xylophones, crunching guitars, and Atari Teenage Riot-styled compression all fly by like the creepy albums Bastard (2009) and Goblin (2011) never happened. Sillier still, "The Brown Stains of Darkeese Latifah Pts. 6-12 (Remix)" pops and locks with some added Ying Yang Twins flavor; then there's the wild experience of Kanye West ("Richer than white people with black kids") and Lil Wayne ("Son you need Jesus/But I hear he left Sunset, to go on tour with Yeezus") mixing with Tyler acting as unforgiving as ever ("Like a HIV victim, nobody F'n with me"). Lyrically, shock tactics and the rapper's returning paranoia mix with some positive vibes and '60s-flavored pop songs (check "Okaga, CA" for proof), and yet, this one could be seen as fractured to a fault. Returning customers who like Tyler the ringleader, or Tyler the producer, will find this to be too much of a good thing, and can embrace the free-form Cherry Bomb as another freaky trip worth taking.