This four-part suite is actually a film soundtrack to the debut feature by Conrad Rooks, though it was never used as such. Recorded in 1965, it was performed by the Ornette Coleman Trio with Charles Moffett on drums and David Izenson on bass; augmenting the session were Pharoah Sanders on tenor and a large studio orchestra arranged by Joseph Tekula. What is most notable is the kind of control Coleman has over the orchestra. His trio is playing by intuition, which was normal for them, but they open to accommodate the more formal constructs of a band who knows little about improvisation and how it works in the free jazz context. Sanders' interaction with Coleman is startling too, in that his normally overpowering voice is tempered here, playing along with the nuances and odd harmonic figures Coleman suggests and then blatantly states from his alto. The improvisation is complementary, not a cutting contest at all. Most of all, the rhythm section carries the balance of power and keeps the entire thing moving, handling the dynamic changes with a feral grace while at the same time suggesting a knottier path for Coleman to follow in the tempting pastoral sections of the work. While not considered a masterwork of Coleman's, perhaps because of its unavailability in the United States in its entirety, Chappaqua Suite is a testament to Coleman's vision as a composer and the power of his orchestral direction. Very worthwhile indeed. 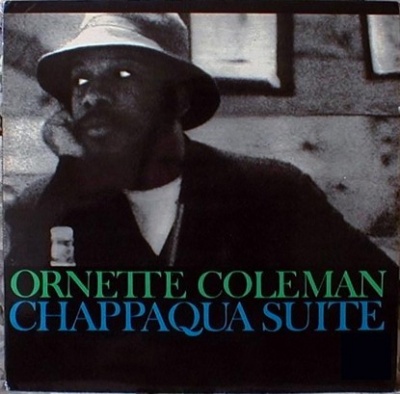