Taking a cue from Lady Gaga's The Fame Monster, Kesha's Cannibal is a mini-LP released on its own and also tacked onto her debut Animal, which has been squeezed dry of hits. Cannibal is expressly designed to rectify that situation, amplifying every annoying element of Kesha’s persona -- the sing-song hooks, the relentless Dr. Luke loops, the squeaked sleazy rhymes, the defiantly transparent Auto-Tune slathered on every track, the cheerful bragging about the dingy film left behind after hookups with douche bags. Despite a tacked-on, unnecessary remix of “Animal,” there is no slowing of momentum on Cannibal, no time spent on meaningless self-reflection, it’s just relentless, pulsating trash, its unapologetic vulgarity chipping away at your better impulses. Kesha is either smart or shameless enough -- ultimately the difference doesn’t really matter, not with music designed to appeal to your worst instincts -- to realize her calling card is her unrepentant filthiness, so she taunts that she’ll “C U Next Tuesday,” teases that this place is about to “Blow,” raves that “the beat so fat gonna make me come” on the apropos “Sleazy,” then far eclipses Katy Perry's malicious “Ur so Gay” on the nasty “Grow a Pear.” Sure, Max Martin's hooks, and especially Dr. Luke's neon-colored throb push these tunes into your head -- they’re in top form, aided by the tight focus of an eight-track EP, Cannibal’s brevity trumping the scattershot Animal -- but what makes them stick is Kesha, a pop star lacking pop star looks and a pop star voice. She’s all ravenous id, spitting at strangers and backstabbing friends, humiliating hotties, and laughing at the wreckage in her wake. She is who she is and she offers no apologies. 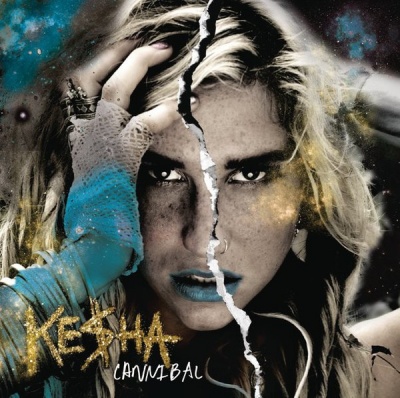