The debut release of Calle 13 in late 2005 offered a refreshing alternative to the mass of reggaeton concurrently overrunning popular Latin music. Comprised of vocalist Residente (born René Pérez) and producer Visitante (Eduardo Cabra), the duo isn't a standard reggaeton act. Make no mistake, though. To a degree their music is reggaeton -- that unmistakable rhythm is front and center, and Residente does rap over the beats as you might expect -- but there's much more to it than that. For one, the beats of Visitante are inventive, incorporating aspects of hip-hop and characteristics of electronica, and are a world apart from the industry-standard trademark of Luny Tunes and that production team's assembly line of bandwagon-jumping imitators. Secondly, the raps of Residente eschew reggaeton clichés, showcasing a healthy sense of humor and an almost clownish approach to sarcasm (à la Eminem) -- again, a world apart from the kingly bravado of most reggaeton vocalists, and the obligatory glimmers of misogyny and violence that accompany such streetwise swaggering. Moreover, no doubt he does flirt with sex a lot, albeit playfully, if not outright jokingly, rather than commandingly or, worse, violently. A few songs stand out, most notably "Se Vale To-To" and "¡Atrévete Te, Te!" Too, there are a number of skits interspersed throughout the album, and they're just as much fun as the music. So if you like the urban side of Latin music yet feel put off by the excessive machismo of reggaeton, Calle 13 offers a refreshing alternative. The beats are here, as is the rapping, and you can dance to it, except the emphasis of this duo seems to be wit, whimsy, and creativity rather than just cashing in on the reggaeton gold rush with the same old staple motifs. 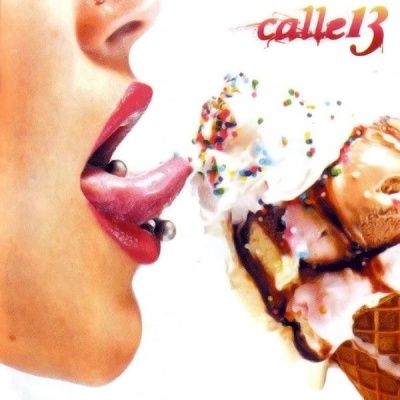