Joshua Bell recorded Max Bruch's Violin Concerto No. 1 in G minor, Op. 26, three decades ago, and the contrast between his callow looks and the steely perfection of his Heifetz-like tone was a great part of the appeal. Now, returning to the work as a newly minted 50-year-old at the helm of his own Academy of St Martin in the Fields, the same ensemble as last time (then conducted by Neville Marriner), he does take the opportunity to change a few things. It's at the movement beginnings that Bell fans will notice the changes most: he gives himself room to hone highly evocative entrances. Sample the very beginning of the Scottish Fantasy, Op. 46, where Bell snaps out of his Apollonian mode. Bell is effective throughout in this work, which masterfully uses little bits of Scots rhythm and melody to give an exotic tinge to what is essentially a grand concerto in the German Romantic tradition. The much-recorded Violin Concerto No. 1 shows the same approach, but the work somehow needs the triad of conductor, soloist, and orchestra; the finale, which is supposed to be rip-roaring, has a curiously restrained quality. Nevertheless, there are plenty of moments where Bell's, well, bell-like tone continues to amaze, and his fans would have been less satisfied with one of the other two Bruch concertos, which need a new recording more than this one does. The sound is a disincentive: it's hard to know what Sony was aiming at with its overly resonant, almost reverb-like studio acoustic. 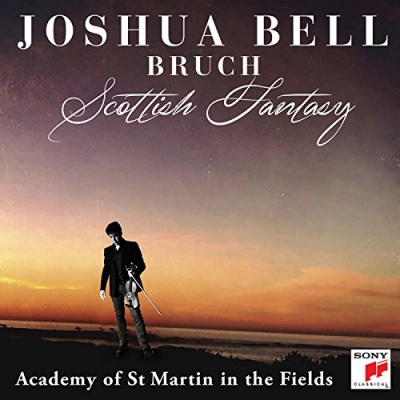