Breathe In. Breathe Out. Review

Hilary Duff took an extended breather after the release of 2007's Dignity, sitting out music in favor for film, television, and family. She returned eight years later with Breathe In. Breathe Out., an album whose title suggests a certain measure of calm but whose music isn't quite placid. Picking up the dancey makeover of Dignity, Duff continues to favor the glossier, melodic segments of pop -- often, the album suggests nothing so much as an American spin on Natasha Bedingfield -- but there are certainly moments when it's clear she's paying attention to recent radio: it opens with one of those moments, with "Sparks" echoing Ellie Goulding while, later on, "Rebel Hearts" thumps to a Mumford & Sons stomp. Elsewhere, there are hazy hints of EDM but the appeal of Breathe In. Breathe Out. is how Duff keeps the focus on the song, so everything, even the rhythms, is coloring on cuts of soft, clean contemporary pop. That the album is ever so slightly out of fashion is also endearing, for it suggests Duff sings this pristine dance-pop not because she thinks it will sell but because it's what she enjoys. 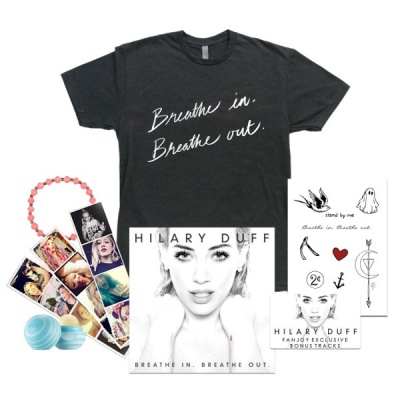 Breathe In. Breathe Out. Album Information