So this is what CTI was all about. Recorded in 1971, organist Johnny Hammond's debut for CTI is a blessed-out basket of blues and groove that covers some of the hot tunes of the day and some organ classics with enough soul power to melt the ice around the heart of even the staunchest jazz purist, who turned up his stuffed-up nose. First there's the lineup: Hammond with Hank Crawford and Grover Washington, Jr., Eric Gale, Airto, Billy Cobham, Danny Moore, and bassist Johnny Williams. It drips soul and popping riffs. Next there's the material: the 11-minute wade-in-the-swamp version of Carole King's "It's Too Late" with a stunning arrangement by Grover and a killer guitar break by Gale. (There is, on the reissue, a stunning live rendition of the track with George Benson subbing for Gale, Freddie Hubbard, and Stanley Turrentine in for Washington. It's longer, seemingly leaner, and quicker. It's a soul-deep river of good feel and slippery vamps.) Next is a bright, sunny, and shimmering version of Neil Sedaka's "Workin' on a Groovy Thing," with Hammond's organ doubling the interval up yet keeping the melody at an even flow. The horn section and Airto's accents literally pop in the middle of the tune, breaking the bridge down into a series of screaming grooves in counterpoint to the organ. The wildest organ workout is Leo Johnson's "Blue Selah." Rich in arpeggios and counterpoint by Gale, the legato is turned up to ten and Hammond never passes over a note -- he rings them all inside, outside, and punches them all up with frighteningly large right-handed chords. The final track on the original is Jimmy Smith's "Breakout," a driving, funky blues that feels more like Tony Joe White jamming with Jack McDuff than a Creed Taylor percussion. Cobham pushes his kit into overdrive and Hammond rises to the challenge as Gale plays one ostinato funk riff after another and the bass holds the groove static. By the time we reach the dueling saxophone solos, we've been through James Brown territory as well, on the good foot and in the deep well of greasy-assed funk and roll. This is a smoking album that runs the gamut of soul-jazz to hard funk and R&B seamlessly, but sweatily. 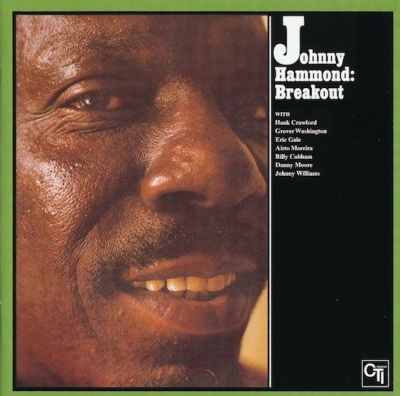