An impressive debut that proudly proclaims its country roots without being afraid to dip its toes into pop and rock, Brand New Man is an entertaining listen. Like most Nashville records from the early '90s, Brand New Man is short, barely clocking in over 30 minutes, but Brooks & Dunn have clearly brought their A material to the table. The voices of the leaders blend well, and they are backed by a crack Nashville band that handles the all-original material with ease. Highlights include the insanely catchy title track and the almost Springsteen-esque "Lost and Found." Fairly traditional country songs such as "Cheating on the Blues" cohabitate peacefully with more pop-oriented fare like "Neon Moon" and "Still in Love With You." Thankfully, these latter tracks do not follow in the all-too-common mold of over-production that would bury the charms of these songs beneath string orchestras, rock guitars, and huge drums. As individual vocalists, both Brooks and Dunn are competent and expressive, although they do lack something in originality and distinctiveness. Although it's probably too much to ask from this kind of record, it would still be great to hear this great band really letting loose in extended fashion; such small tastes as at the end of "Cool Drink of Water" make the listener thirsty for more. Occupying the middle ground between Johnny Cash and the Eagles, Brooks & Dunn have put together a terrific group of songs that are memorable, hummable, and, most importantly, fun. Despite the diversity in the material, the album works well as a coherent whole. All in all, Brand New Man is a fine, fine collection of pop-country songs, masterfully played. 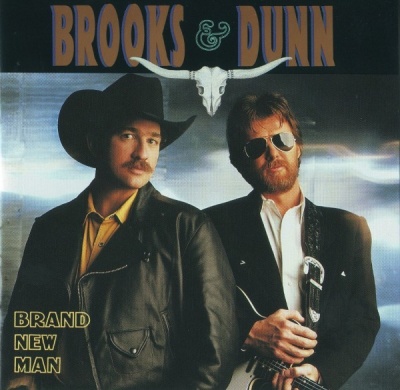